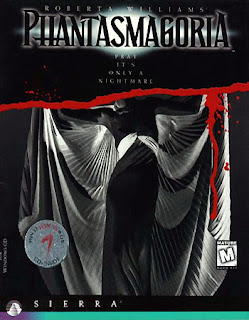 Some of you may still not know that I love the FMV games of the 90s. I gave a glowing review to the Sega Saturn/Playstation/3DO game D which is damn near an interactive movie with some point and click adventure elements mixed in. With that said you probably can tell where this game is going. But here's the thing. When I was a kid my PC gaming was limited due to the fact that I didn't have the money to have a computer that would play a lot of games. Also the game I'm going to talk about I would never be able to get away with playing when it first came out.

Phantasmagoria is a FMV heavy point and click horror adventure game released in 1995. It was received with mixed praise but more than anything else it gained a lot of controversy for it's content. The game is played out with live actors with a pre-rendered backdrop. Keep in mind visuals like that were pretty mind-blowing back then. Yet I find it hard to believe people once thought having the actors play over those visuals ever looked good. Anyway, the game is pretty intense at parts with the content. It includes scenes of intense violence, creepy as shit visuals, and even a rape scene. If you want to see the crazy possible deaths then just go to youtube and do a search. There all there. The game was only released on PC in the states and it came on a whopping seven discs because of all the FMV. A lot of discs for one game at the time. However when the game was ported to the Sega Saturn in Japan (under the name Phantasm) it came on frickin EIGHT DISCS! Can you imagine bringing home a game that has that much swapping? And if you know what's going on or can figure out the puzzles easily it would only take a few hours to complete. Not like this is a mega huge RPG like the four disc long Final Fantasy IX for Playstation. And I thought Riven was big for having five discs.
So with it being an FMV adventure game there are two main elements. The visuals and the puzzles. One being much stronger over the other in this case. Let me say that I love the visuals in this game. I am a huge fan of early 3D modeling because it has it's own unique style. I would sometimes play through games like Myst just to look around at the visuals. So when I got to journey through this AMAZING, BEAUTIFUL (in my mind) mansion I was loving it. Couldn't stand having the digitized person walking all over it but that's beside the point. I'll get to that a little later. But this mansion is amazing. It was previously owned by a famous wizard with a FUCKED UP past that we slowly learn about throughout the game. The dining hall, master bedroom, even the attic is massive. Also since he was a performer he has his own theatre built in. Not only do I love how expansive the mansion is but also I love how creepy it feels. There are room that are essentially abandoned or full of old storage this wizard used to own when he was alive. It gives a really unsettling vibe wondering what the story is behind each room and item. A lot of mystery is present throughout, a lot of which is sadly never answered. But the fear of not knowing is always the best!
Now the puzzles are where the game has it's shortcomings. The game is split into seven chapters. How much time you will spend on each will depend how quickly you can figure out each puzzle. Maybe with the exception of the last chapter. Something I want to talk about in full at the end of the review. Now one area I'm thankful is the fact that this game's puzzles aren't as bass ackwards with it's logic like other adventure games. If you need a reference look up the Hitchhiker's Guide to the Galaxy game. That has some really messed up logic. But with all the video the game is limited in what it can do and where it can go. Making the puzzles pretty simple for the most part. There were a few times when I looked up a walkthrough for assistance because I did get stuck. Still, before I did that I would always refer to the hint section of the game which provides anywhere from cryptic clues to flat out telling you what to do. In the end I didn't play this game for the puzzles, really, I came in for the horror aspect. I wanted to see what sort of crazy story this game would come up with.
Man oh man is this story bonkers. So I briefly touched on the magician who used to own the mansion. Well in typical horror fashion the magician wound up going crazy and killed a bunch of people. This is something we see full on in flashbacks. Two scenes in particular that stand out are pretty intense. One is where he has a victim bound to a chair with a blade pendulum attached that swings down and slices directly through their face. Gory as hell. The the other one the magician has his victim strapped down to a table and is force feeding them raw human flesh and guts. Literally stuffing them so full it chokes and kills them. Again, rough. And so as the mystery unfolds about this magician you learn about his involvement with the dark arts as one would expect. But again I'll talk about that in a little bit when I walk you through chapter seven. It's just that between those flashbacks and everything else that's disturbing brought up in this game, it gives great atmosphere. The tone and atmosphere is excellent, giving a very creepy vibe. Between the (un)intentional creepy visuals using the early 3D rendering they had along with the type of "Spirit" music (as I like to call it). Meaning disturbing music usually associated with the creepiness of demons and the antichrist, ala The Omen or The Exorcist. Very orchestral with a choir singing something terrifying in Latin. That sort of music that is both beautiful and haunting. And with the very rough around the edges visuals with the digitized characters it does provide a great experience overall if you let yourself fall down the 1995 rabbit hole. Even if your lead character dressed in black mom jeans and horrible long sleeved orange shirt.

Okay, okay, okay, chapter seven. One thing not seen often in these point and click adventure games is action sequences. Usually the games are all about your wits on figuring out where to go next, not necessarily how fast you can do it. Well all of chapter seven is an action sequence where you need to make split second decisions to save your life. Remember that this is the end of the game so spoilers. One thing that's been happening alongside discovering more about the magician is that your character's husband has been going insane much like the magician. And what was discovered with the magician is that he called on a demon from hell to grant him powers. So it's pretty clear that demon is now in your husband. Anyway he kept getting worse and worse as the game went on and by chapter seven he is flat out nuts literally trying to kill you. He eventually traps you in the same chair with the pendulum blade the magician previously used as a murder weapon, wherein you distract your husband and kill him with said blade. As he dies the demon previously called rises up to attack you.
Let me stop for a second. This demon looks crazy. It looks like someone was trying to render the South Park version of Satan, colored him blue, and then gave him a snail like tail instead of feet with slime trailing after him to boot. It's a strange design that I don't get and I actually find to be one of the lesser creepy things in this game. It just tries too hard.
So this demon starts following you to the cellar. However you are able to stop him dead in his tracks with a wooden door. I shit you not a wooden door. Your character then needs to run down to an altar where you perform a ceremony to send the demon back to hell. It takes a long enough time and really bugged me how long it took for the demon to break through. Still the whole thing can feel very tense and you can watch this playthrough (The demon stuff starts 14 minutes in) so you can get a full sense of what's going on.
The game ends when you are able to defeat the demon wherein you walk off the property. Followed by some of the worse ending credits music I've ever heard in a video game.

It may sound like I didn't like that last chapter. Parts of it I definitely did. It was tense when a lot of the game is spent running around trying to find the next piece to a puzzle. It's where that AMAZING soundtrack kicks in high gear. And if you fail it gives you some of the best gore in the game. Almost hard to avoid winning just so you can see the crazy kills (for example, the demon literally tears your face apart). I'm not crazy about how the game ends but really I don't play games or watch movies for the endings anymore. In any story there are only so many directions you can go so I make it about the journey. And the journey is fun and unique. So if you're into point and click and don't mind some very mature rated content then you're in for a ride. Just try and get past the very poorly aged visuals (which I love!) and terrible acting and I think you'll enjoy it.

And as I finished off the game I was saddened because the experience was over. Thankfully I still have a few other unique titles like this on my computer. Immediately following this playthrough I started up Phantasmagoria 2: A Puzzle of Flesh. It has no connection in regard to story or characters but it is similar in theme. There were plans for a third game but it never happened. Still it plays in a similar fashion but with a production value upgrade (sadly no more pre-rendered design. They use real sets) and more of a somber presence instead of the classical style of horror the first game had. After that I will be playing through the other semi-popular point and click horror adventure game The 7th Guest with it's sequel The 11th Hour shortly thereafter. Now I guess all I need is to get my hands on Harvester and it'll be a bombastic end to a horror game marathon! Hopefully it'll be on GOG or Steam eventually since I've had trouble in the past installing old games from their original discs on my newer computer.