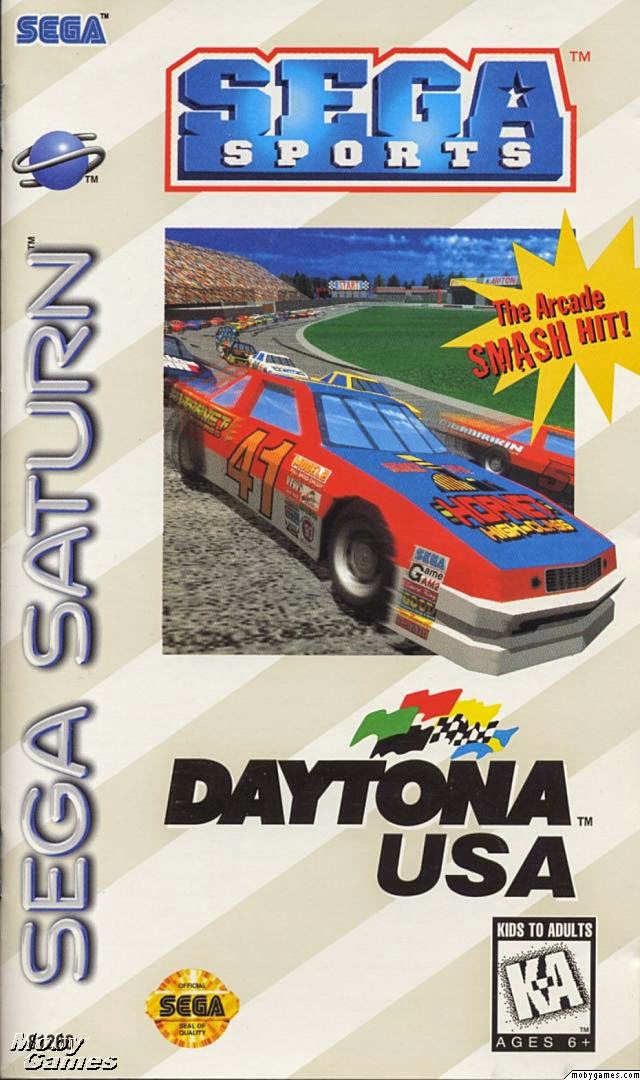 History: Originally released in arcades in 1994, the game was ported to the Sega Saturn in the spring of 1995 making it a launch title for the console in the states (in Japan the Saturn came out the previous fall/winter). Much like the arcade version the game received a lot of praise despite not playing as strong or looking as good in the arcades. An extended edition (of sorts) was released in late 1996 known as 'Daytona USA: Championship Circuit Edition' and it included more tracks, better visuals, and even online play! 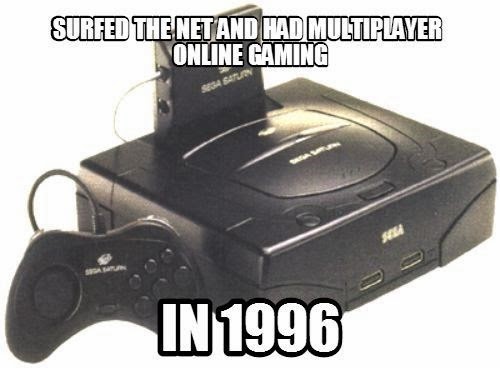 Availability: Was released exclusively for the Sega Saturn with no ports or sequels until years later. Daytona USA 2 was released exclusively in arcades in 1998 with no home ports. Then a remake of the original was released in 2000/2001 (depending on your region) for the Dreamcast. An HD upgrade closer to the original game is really easy to find for modern systems. You can buy it on the Playstation Store or XBox Live Arcade. I have not played it but I'm sure it's fine and dandy. To my understanding it is faithful to the arcade, non-remake edition but with improved graphics and multiplayer options.

Personal History: I remember having this game as part of a three-pack that either came with my Saturn or I picked up second hand. The three-pack included this, Virtua Fighter 2, and Virtua Cop. I never owned a proper, original boxed copy until now come to think of it.

Version I Played: US version, non-Championship Circuit Edition release both then and now. Using standard controller as I don't have the driving controller yet.

Review: I finally did it! I finally picked up a Sega Saturn again. And this time it's for keeps. No more of this buy/sell/trade crap. I am so happy to have it again and I plan on embracing it much like I've been embracing my Dreamcast. I plan on building my collection for this over the less interesting modern consoles, not to mention doing plenty of importing. Until I build up the cash to make my collection a strong standing one I'll start with a more common title. Less expensive for sure, but still a classic.

Racing games have never really been my cup of tea, and when they are they're not the realistic kind. I love Cruisin' USA, Crash Team Racing, Mario Kart 64, Burnout 3: Takedown, and of course the Saturn exclusive Sonic R (didn't see that coming I bet.) I have tried to get into games like Gran Turismo multiple times but it's never done it for me. I could never get used to the way it controlled, or at the very least I never had the patience or interest to get better at it. Whatever, when the game becomes work and I'm not invested it's not fun anymore. Maybe that's why it's been so hard for me to get into the Ultima games (conversation for another day.) There are of course few exceptions and Daytona USA is one of them.

The reason being? Daytona USA is just good old fashioned video game fun!
Come to think of it Daytona USA is a rarity. Typically game genres have a very clear presence in the market rarely crossing over. This is especially true with sports games. While you may see first person shooter games that play out like a role playing game or a sidescroller with some puzzle-like twists you don't see sports games in the mix. And no, games like Mario Kart do not count. While racing is technically a sport that is so disconnected from the sport it's not even in the same universe.
What makes Daytona USA standout is it can appeal to both the casual observer while pleasing fans of actual racing at least on a casual level.

First it gets it right visually. There are elements of realism to the design of the cars and tracks without them being licensed. I don't know about you but the moment something goes into the world of licensed property my thoughts and attitude toward said game changes. If Sega produced a NASCAR game I would have likely looked at it differently until it proved to be better than the typical garbage that comes out. But Daytona, while referencing a very real speedway in Florida, never presents itself like a licensed product.
There's also no reference to real racers. This may not please NASCAR-like fans but the way Sega interprets their original ideas make them feel like real race cars. It's a unique experience from Sega instead of a digital interpretation of what real racers are driving that, again, can please real life racing fans and general video game fans.
I'm not aware of any sort of accuracy with the tracks but I imagine those are like everything else in the game. Referencing something real but not a direct interpretation. Because of this originality in their execution I'd say, in the gaming world, more people recognize Daytona as a racing game than an actual race track. Unlike other sports games where even gamers will recognize the real people or real sport over the game.
Daytona USA became so iconic to the gaming market the Hornet (the car in all the advertisements) is practically it's own character. Constantly being referenced in later Sega games including Fighters Megamix where it was a playable character. 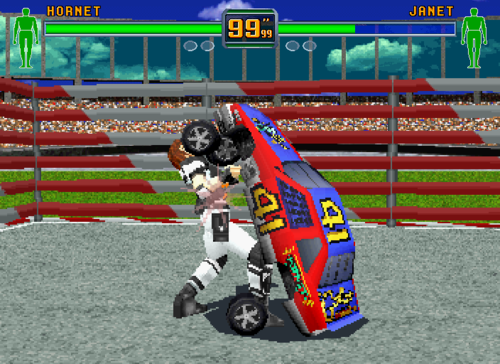 This is a real screenshot from a real game developed by Sega, not a hack.

Really the visual concept is top notch and very appealing. As is the actual gameplay.
The whole reason Daytona USA is so loved is because it has that nice middle ground approach more games need. Meaning it's easy enough to pick up and play (as it was originally an arcade game) and while you may not get first place every time you can do well enough to keep moving onto new tracks or replaying old ones. At the same time it has the ability to be incredibly challenging depending on the track you chose or if you play via manual or automatic driving. Like I talked about in my Nights into Dreams review, easy to pick up and difficult to master. The perfect combination for an arcade game of any kind.
Believe it or not the driving mechanics are what make this game what it is. Adding to the widespread appeal it has this very approachable yet slightly realistic mechanic. When driving you feel a sense of weight to your vehicle. Unlike other raters like, let's say, Cruisin' USA/World/Exotica where you are bouncing all over the place with little to no consequence Daytona makes you think about each turn but not as much as more realistic driving games like Gran Turismo. Still enough to make you think about each turn instead of flinging the wheel all over the place.
Besides, there are consequences for poor driving. 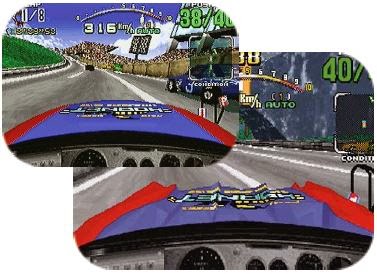 Thank you to whoever photoshopped this and put it on Google.

Depending on what generation of games you date back to you may find it hard to believe that Daytona's cars were affected by the damage done by slamming into other cars or into walls. So if you're bashing all over and you notice your car isn't doing so well it may be a good idea to stop into the pit stop where they'll do a quick fix up on your car. While not entirely realistic in how quickly and easily they fix up your car it adds a sense of realism seen in actual races. Definitely more realistic than when you crash into walls and your car literally flips into the air only to land safely and keep driving like nothing happened. 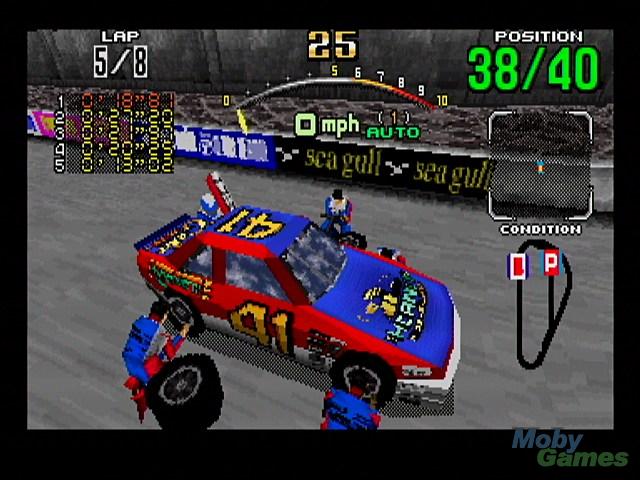 I really have very few complaints about the experience Daytona USA offers. It definitely holds up for me and I can't wait to get a steering wheel to play it properly. Despite being a visually less appealing experience than the arcade it's still a great port, especially since I've read reports it was a rushed port to get it to the Saturn market. Which is likely why there was a second edition released outside of simply adding online features. And while the draw distance is far from pretty (especially with all the clipping) it doesn't really bother me because I'm so engrossed in the race itself.

Really my only complaints are petty and have to take the times and context into consideration. For example, there are only three tracks. Easy, medium, and expert. They are all very well done tracks for sure but it may leave you craving for more. Also while the Saturn version lets you play as a couple other cars unlike the arcade version that lets you play as one with either manual or automatic transmission, the difference in the cars isn't that significant. Meaning you'll likely just pick the care you like the most and stick to that.
This will probably come off as absurd from my modern perspective but the lack of options is what I don't like about this game. Which, like I said, is petty for a number of reasons. Since this is a port of an arcade game I can't expect there to be a ton of options. Especially from the early days of 3D. Still the lack of content does make this a game that only offers me short play sessions unless I were in competition with friends. Something I can't even do proper with this version because it only offers single player play. Until I get a second controller and a copy of the Championship Circuit Edition I'll be doing this solo.
I guess I'm a bit too used to my games being longer and with a story. As much as I like arcade games in concept this is definitely a wake up call that they don't appeal to me as much at home as they used to. Which is the most unfortunate part of this otherwise positive review. That this game will likely collect dust while I'm trying to get to the next disc in Enemy Zero also on Saturn, level up in Phantasy Star Online on Dreamcast, or whatever I've got going on, on PS3 right now.

While I haven't played the enhanced Championship Circuit Edition I imagine it's better than this original version. Same goes for the Dreamcast version and digital re-release on modern consoles yet I still think this original has value. If you're looking to jump into Saturn collecting this is still a good game to pick up. I've found it's less expensive than the enhanced version. Also you'll likely find the old three-pack I mentioned way, way back at the beginning of this post that also includes Virtua Fighter 2 and Virtua Cop. Still this is a very common game to find and you can find it cheap. I got mine complete with case and manual for $5. It may not have as many bells and whistles as other editions but it's not a bad choice. If you don't have a Saturn or the interest in picking up one you can always get it on PS3 or XBox 360.
Can't wait to pick up the enhanced version and so a review comparing and contrasting. Minus the online play of course...
Posted by Thirsty->Cat at 5:58 AM