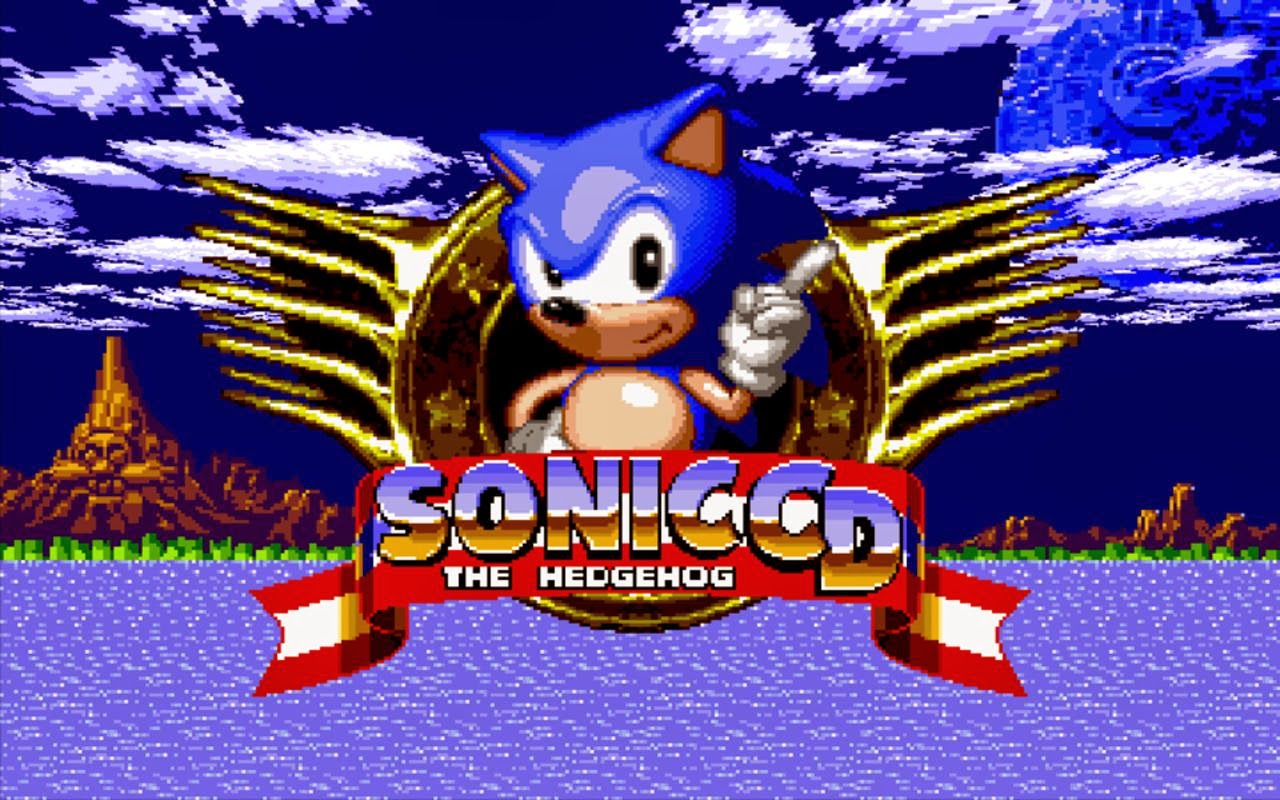 History: Began development shortly after the release of the first Sonic the Hedgehog. It was originally not going to be it's own game, though. This and Sonic 2 were being worked on at the same time and would be the same game. One of course with technical differences by being on a CD. During development it turned into something completely different (especially when comparing to what Sonic 2 became.)
Sonic CD was released exclusively for the Sega CD on September 23, 1993. It received critical praise and sold very well. For years I would even hear people claim it was the best Sonic game ever made. However, despite this praise and large sales it still sold poorly when compared to the Genesis games. Largely due to the Sega CD itself not selling well.
Strangely this game is somewhat controversial but it's because of the soundtrack. The American release had a completely different soundtrack than the Japanese and European release. Many fans don't like the American one, stating the Japanese soundtrack is superior. So when a new port is released the first question is wondering which tracks they'll go with. Thankfully the most recent port included both, giving the player a choice.
The game was considered one of the best, if not the best, game on the Sega CD. Characters and elements would even play out or be revisited in later Sonic games. This was the first appearance of Amy Rose and Metal Sonic, for example. The story was adapted to the Sonic comic books as well. Lastly, the Metal Sonic boss fight was re-created in Sonic Generations, a 20th anniversary love letter to the franchise released on PS3, XBox 360, and 3DS.

Personal History: Since this game came out when I was six it should come at no surprise I didn't play it a bunch when it first came out. Not to say I didn't have the other Sonic games. I did. I just wasn't living in a rich household that could afford an expensive add on to a console I was already lucky to have in the first place.
I did play it a little here and there throughout the years. In stores, via collections friend's had, but I never had my own copy until the PSN digital release. So my experience, while spread out throughout the years, is still relatively recent.

Availability: Originally released only on Sega CD in 1993. The first port was released in 1996 on PC. It wouldn't be re-released again until 2005 when it was included on the Sonic Gems Collection for Gamecube and Playstation 2.
The most recent port was in late 2011, which was also the first time it was release not in it's native state. The core game stayed the same but it was treated to a widescreen presentation and some bonus features like playing as Tails when he wasn't in the original game. This port was released digitally on the Playstation Network, XBox Live Arcade, iOS, and Android. A newer PC port (than the previously mentioned 1996 port) was released the following January, and eventually a Windows phone port late 2012. Lastly, this port was released on Ouya in August 2013.

Version I Played: While I've played the original Sega CD version in sprinkles, I played the PSN digital download version for this review.

Review: There was a point in time where I wanted a Sega CD. Not just in the mid-90's but in recent time as well. It was always a curiosity to me. Within the last year I remember seeing it on sale with the first generation Genesis attached for a really good deal. I brewed about it for a while but when I went to buy it, it was already gone. Initially bummed out but I'm glad I didn't get it. Going through the library there aren't a lot of games I feel make the system worth buying. Mostly because some of the best also came out on other consoles in forms of ports and re-releases. This one included.
So I found it unnecessary to get a Sega CD. Besides, the Sonic CD port on modern consoles is great! But the funny thing is I still have a Sega CD copy of this because a good friend sent it to me a while ago. 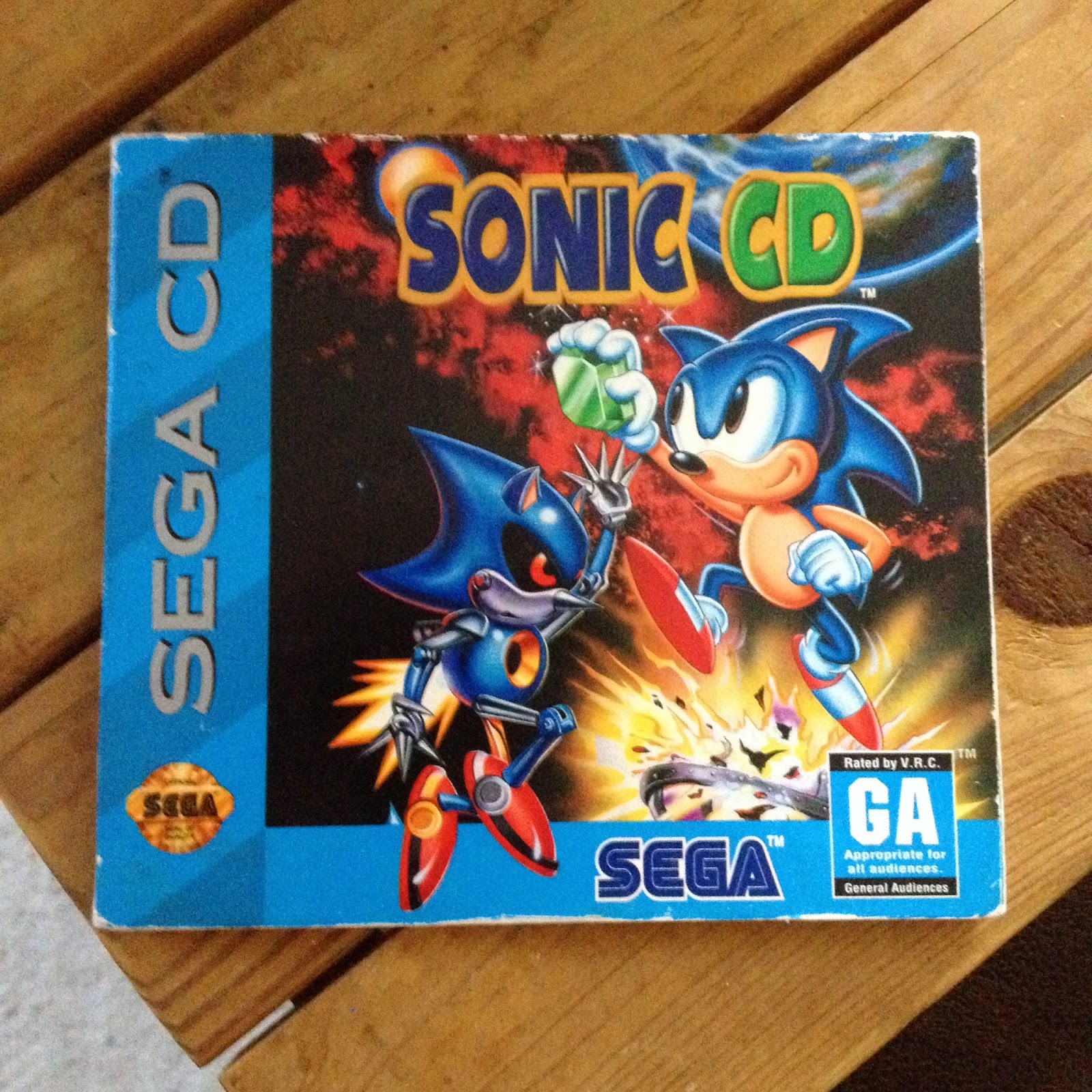 A nice little item to hold onto.

Being a big fan of Sonic from his glory days I was very excited to see this port. I bought it right away when it was released. Now like I said in the personal history section... I didn't have a lot of experience with this game when it came out but was always interested because of what people said about it. That and it was an essential, official entry into the 2D series of games. Me not playing this for so long felt like a crime against my fandom... as dweeby as that sounds.
But does it hold up all these years later? Do the years of anticipation and curiosity pay off? In many ways they definitely do.

This being made during the best year's of Sonic's game life gave it all the right elements. The core gameplay flows incredibly well in every way you'd expect it to. It feels and plays just like Sonic 1 or 2 (maybe not 3 or S&K) because the controls are essentially the same. Also it has the same left to right 'reach the end of the stage' approach. Nothing fancy. Just what you'd expect from a Sonic game. Which makes it all sound par for the course. Not quite if you ask me.
A big thing that sets this one apart from the rest is the colorful design and unique/innovative ideas it utilizes for the franchise.
This is easily one of the best, if not the best looking Sonic game of the side scrolling days. It has a unique charm to its approach that none of the other mainline games have. It's vibrant, exciting, and a lot of variety in the visuals. 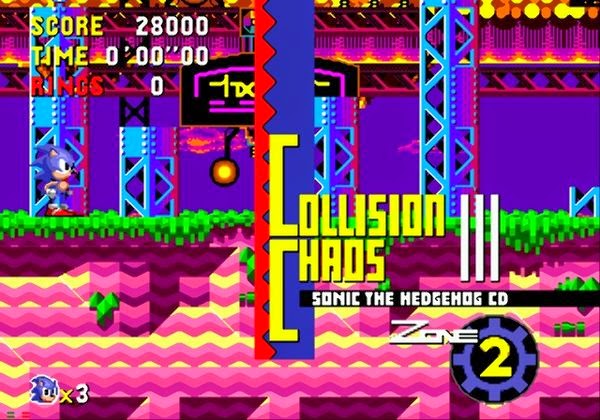 To add to this there's a time travel element. Throughout the levels you can either go into the past or the future. I didn't quite understand the purpose at first outside of a visual change (past has more vegetation, future looks like Skynet took over) but according to online resources the past has more difficult enemies, whereas the future has less (because of machines breaking down I guess.) Unfortunately I didn't notice this naturally which says something about the game's design (but more on that later.) I also believe the route you take decides the ending.

I also really like the design in the boss battles.

These are among the most creative and in some cases the most challenging (in a good way) in the franchise. What I liked is they utilized elements that make the stage unique and throw that into the boss battle. They didn't feel interchangeable like with other Sonic bosses. It was a nice change of pace that went beyond 'jump on his head three times and win' that is far too common even in later, 'more advanced' Sonic games. 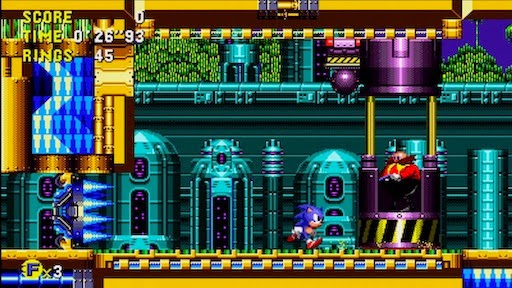 My two favorites are the conveyor belt boss and the Metal Sonic race.
The conveyor belt is the one pictured above. Robotnik's station is constantly being torn apart from below. The idea is to dodge his attacks and pretty much just survive while the conveyor belt pulls you back toward the spikes. The faster you run the quicker it rips Robotnik's station from below, meaning the quicker you win. It's definitely not the usual fight.
The other is the Metal Sonic race. This is set up similar to a standard level but you're racing Metal Sonic while being chased by Robotnik who is constantly shooting a deadly laser at you. This is fast paced and very exciting in all the ways a Sonic game should be. Also it's even more a 'survival boss fight' than the other favorite of mine. Not to mention Metal Sonic is one of my favorite characters. Such a cool boss fight, such a cool climax to a great game.
The final boss fight isn't as exciting but having the animated ending (on top of an animated opening) make it feel worthwhile finishing.

Sonic CD is, as many say, one of the best Sonic games available from the glory days. But it's not without its faults.
While it has a great visual design and controls well, the level design can be quite poor a lot of the time. The previous and later games would have winding paths that allow fast paced action that is easy to fly through despite the chaos. Sonic CD has a problem where you're constantly being thrown in odd directions that don't always make sense, or they slow you down. There were times where I couldn't tell where to go or it felt like there was no clear path. One section is almost entirely underwater, and another had floors that rocket you uncontrollably into the sky. It makes the game dizzying and confusing.
The other big problem I had was that the special stages didn't feel so special. They definitely look cool, especially in context of the time... 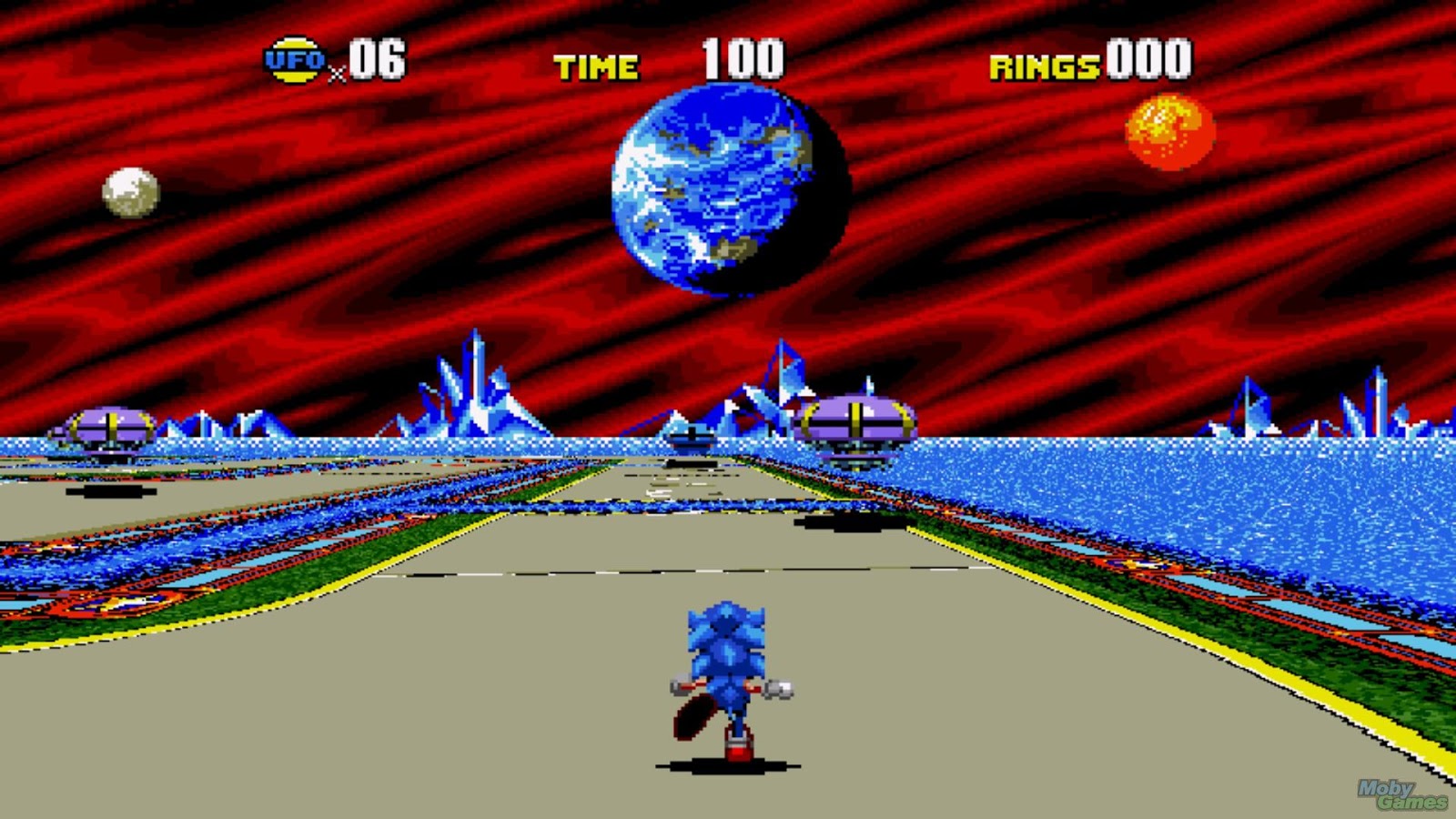 ...but they felt more like a tech demo of what the console could do instead of actually being something well thought out. You run around on an oddly designed track taking out UFOs. If you destroy them all you get the emerald like any other Sonic specials stage. This is fine and somewhat a step up from other special stages. I do like it more than the Sonic 3 special stage, that's for sure. But the way it controls is a pain. You turn in a wide motion and far too slow. You're likely to bump against the edges which can bounce you back, throwing you around uncontrollably like some of the previously mentioned poorly designed levels. I can only imagine how difficult it would be getting all seven emeralds.
Tough enough as is in the other games.

My list of complaints, while short, can hurt the experience as a whole. The early and later stages are a blast but those poorly designed levels in the middle make it something I don't want to revisit a lot. It's so close to Sonic perfection. It is strictly a Sonic title without extra characters (minus the addition of Tails in the re-release port), looks great, plays great, has a lot of excellent ideas, but enough to keep it from being as great as it could be.
At least it has a killer soundtrack! And between the Japanese and American soundtrack... I lean toward American. I just wound up enjoying it more. While the Japanese soundtrack isn't bad I felt it had too much going on. The American soundtrack has a great Sonic-like vibe I've seen in other games and I just enjoyed it more.

Despite the faults this is still a great experience. I wouldn't suggest introducing yourself to the franchise using this game. Start with Sonic 1 or 2. But definitely check this one out at some point. Do not let it go by the wayside. It is worth checking out. Who knows? Maybe you'll be more forgiving than I was. My retrospective look after years of tinkering with the franchise has given me a specific mindset so I know what I know and think a certain way.
Posted by Thirsty->Cat at 4:17 PM