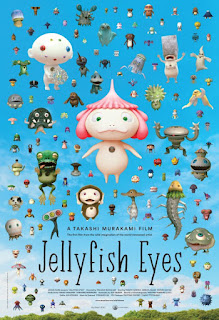 History: This marked the directorial debut of famed Japanese contemporary artist Takashi Murakami, whose skills also include painting, sculpture, fashion and merchandise.
It was originally released in Japan on April 26, 2013, but didn't make it's way to America until July 15, 2015 in a limited release. It received mostly negative reviews and currently holds a 18% on Rotten Tomatoes and a 4.8/10 on IMDB. It was eventually released on DVD and Blu-Ray in America through Janus Film and The Criterion Collection the following December.
While unsure how it was received in Japan and despite the negative reviews in America, a trailer for Jellyfish Eyes 2 was released on the American home video release. Very little information is currently available regarding that sequel.

Personal History: Honestly... I saw this was coming out on Criterion, checked out a trailer, was able to get a great deal, and went for it. Let's see how this works out.

Review: Leading up to my first viewing of this movie I had only one thing in mind in terms of expectations. I explained it to myself as a live action Pokemon movie solely based on the trailer. This didn't affect my overall opinion of the movie because it both was and wasn't true. It was true in the sense that a bunch of kids have cute, little monsters of a great variety that are stored in small devices using some wildly advanced technology the audience can't possibly understand. But not true in the sense that Pokemon isn't the only IP that's done this approach. It was stupidly ignorant of me to think so simply because tiny monster companions is a big thing in Japan. I can't speak to full detail of the fandom or the history and everything, but I know it's something done in multiple iterations that we've only seen a few versions of (other than Pokemon see stuff like Digimon and Yo-Kai Watch.)

Guess the movie will have to stand on it's own merits to me because I don't have that 'collect em all' mindset of fandom.
Honestly I'm not really sure what attracted me to Jellyfish Eyes in the first place. I saw it was coming to Criterion, I looked up the trailer and I liked what I saw in that preview. Despite some of the obviously cliched 'anime-esque' stuff that I knew would be present I had a strong feeling I'd enjoy it.
Bought it on a whim and... I'm actually happy I did.
To be more specific with plot.
The movie is about a boy and his mother who move to a small town for initially unexplained reasons. We later find out his dad is dead ala subtle clues like mama crying over a photograph of the family and later a dream his son has where his dad is murdered by a fucking tidal wave. Subtle. This is also the town the mom's brother lives and works. A rather kooky scientist who works for an even kookier comic book super villian of a company.
Basically how we get to the little monsters... four hooded figures went around town passing out these devices that look like iPhones with a knockoff third party case around it to control these adorable creatures. However these devices are linked to their homebase where they use the negative energy in children (pain, sorrow, anger, etc) for their evil intentions.
The only little monster who isn't controlled by these devices, and therefore finds the star of the show, the little boy who lost his dad, on his own and they quickly become best of friends is a little jellyfish looking dude. Thematically it's ironic that this monster was based on a jellyfish seeing as how his dad died. But maybe that's why he was able to connect with it so well... because it reminded him of his dad? Maybe, maybe not. Either way Karage-bo (or, Jellyfish Boy) is easily one of the most adorable and lovable characters I've seen on screen in a while.
This is where the movie was going to make it or break it for me. Even if the story isn't great and the human characters aren't good, the movie has to have cute and fun monsters to sell me this as a good experience. Thankfully we had Karage-bo. I just love the hell out of that little guy. He barely speaks but has way more character than characters in bigger features. 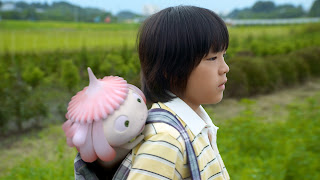 Just look at him!!!
One thing you may or may not have noticed was the quality of his animation against the real world. You're not seeing it in motion so it's not as noticeable, but it is very noticeable, at least at first. Despite being from 2013 this has shockingly outdated CG for it's characters. Whether it was a budgetary reason, creative reason, or even regional reason (not everyone outside the US have effects as nice as we do) I felt the direction made good use of the effects, or lack thereof should I say.
Once it got going I didn't find myself distracted by the effects. The characters that were animated were so cartoonish that it was easy to forget how 'bad' they looked, especially when they interacted with each other. So much so that I wouldn't mind seeing an entirely animated feature starring only the creatures, as presented by a sequence that is just that during an intense battle in the last half.
I did have some immersion breaks when they interacted with non-animated characters, though, simply because of how differently they moved and acted against each other. And of course how easily one can tell that kid isn't holding the little monster dude, even to the untrained eye. Some scenes looked like they were ripped right out of 1997 cinema when this came out only a couple years ago.
Also one of the characters is a lovable gigantic hairy monster that'd you'd see on the Muppets or Sesame Street. I have no problems with this character as is. Actually I wanted to give him a great big hug! 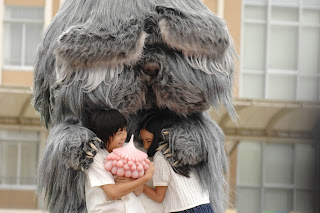 So fluffly!
But he encountered a similar issue of not melding with the rest of the world around him. He melded well with real people because he's a guy in a suit instead of computer generated. So when he, the kids, and Karage-bo are all hanging out together it's an odd mix.
Come to think of it, seeing those characters together on screen at once is a good visual representation of this movie. It has some cute, fun, and creative ideas, but when put together they don't all quite fit.
The CG doesn't mesh well, the choice to have one in a suit is also off, the main story mixed with the B-stories are jarringly different in tone, and overall I struggle to tell who this movie is for. I get the impression this is for kids but there are a few moments that feel a bit intense for young audiences, like a scene when suicide is heavily implied. Then again I don't know exactly how and what kids are allowed to see at what point in their lives over in Japan so I could just be talking out my ass. But considering how prudish Japan can be when it comes to sex the anime girl in a maid outfit flashing panty shots seems out of place... 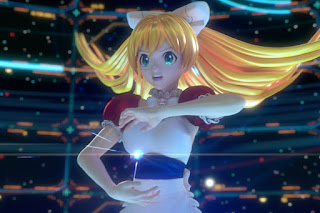 She's one of the 'monsters.'
While there's a ton of great stuff here it has a lot of roughness around the edges. I don't mind the over the top super villains but it doesn't mesh well with the very down to earth, dramatic troubles of the other characters during the side story sections. I already mentioned I don't mind the lacking CG but the moments when it doesn't meld well with everything else are painfully noticeable. I also don't mind the multiple storylines, I just wish it was better paced and edited. Sometimes we're left with too much or not enough, making it feel longer than the movie really is.
Despite these troubled I still found it to be a very fun movie that's worth at least a try. I certainly don't agree with the surprisingly low 18% rating on Rotten Tomatoes. I feel that's a bit harsh. It's not great but it's not terrible. It's a fair in-between that would likely be forgotten by most. And that's what sad, is that I see good ideas here just not implemented well.
Which brings me to the elephant in the room... what the hell is this movie doing on Criterion? 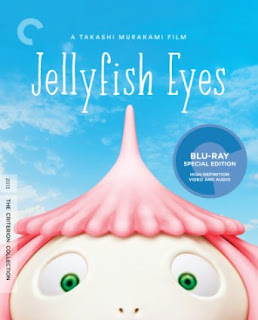 How did this happen?
I know it's a matter of opinion if a movie is good or not, but Criterion specifically selects titles that fall under a specific 'criteria' in terms of quality or significance (or both) in the history of movie making. They then give it their best possible treatment and, in practice, make it the last copy you'll ever have to buy.
Now with those high expectations it's made me wonder how and why some titles got into this collection, whether it be the Beastie Boys Music Video Collection or Supercop (from way back in the laserdisc days.) Titles that aren't bad but may not warrant such an exclusive and extra special treatment. I mean... I like The Cabin in the Woods, quite a lot, but I don't think it deserves a Criterion treatment.
So why and how did Jellyfish Eyes make it to Criterion? It's not a huge deal, I'm just trying to understand their reasoning. In the eyes of other Criterion pieces it's underwhelming. Doesn't make it a bad movie, only a movie with disappointing expectations because of where it's coming from.
None the less this was a pretty cute and fun adventure that would be good for a Saturday afternoon. Hell, maybe your anime-obsessed friend will enjoy it at least. Now I need to go get a Karage-bo plushie! 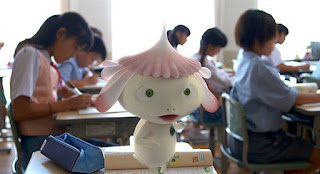