A few months back I went on another one of my binge laserdisc purchases. I don't seem to ever get them one or two at a time, more like a short stack at a time. Sometimes a BIG stack like the one I ordered last summer: 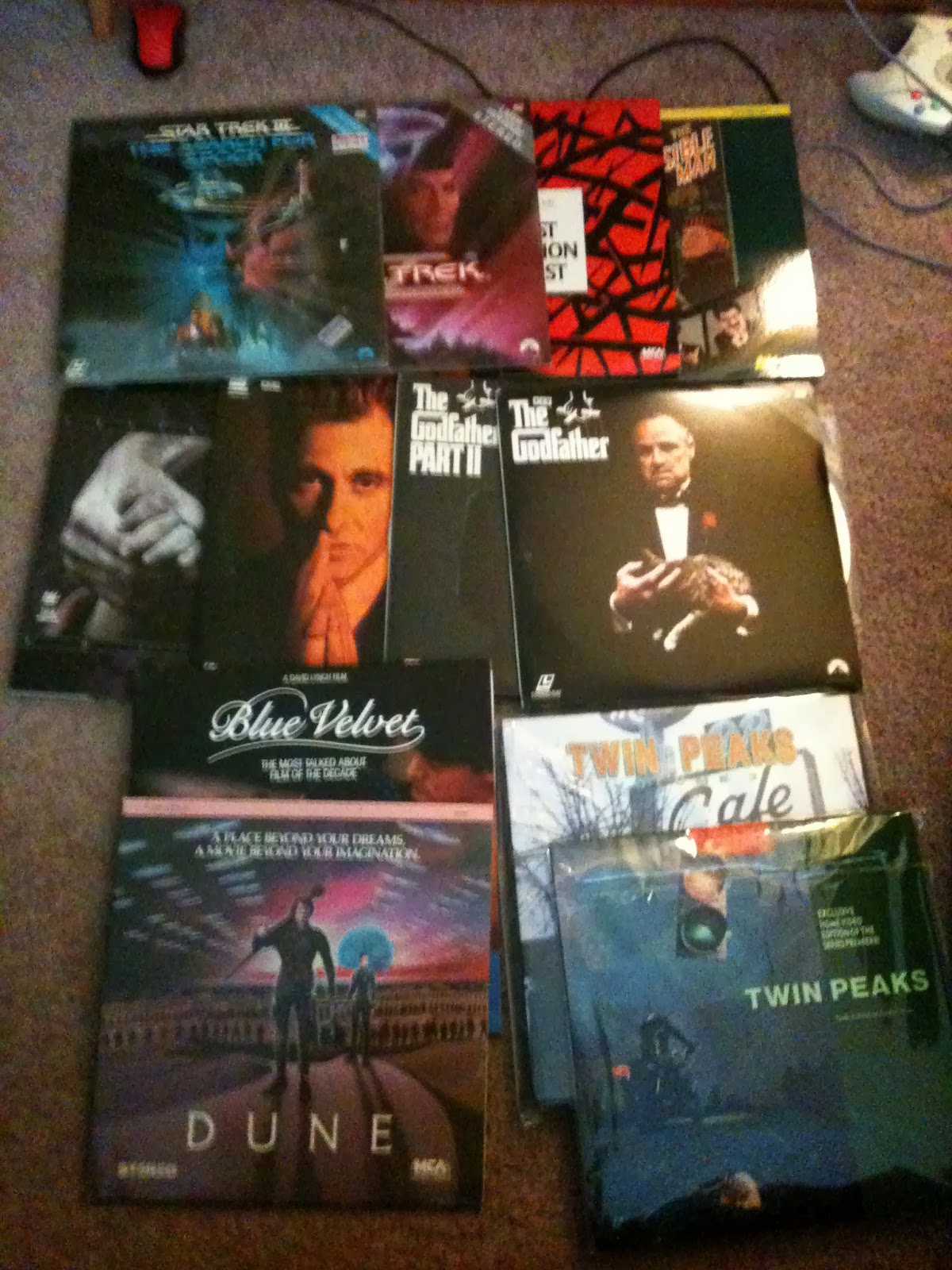 But they're not always the popular titles like I just showed. Sometimes the titles are very obscure. I often buy movies on laserdisc I've never heard of simply because the price is right (most laserdiscs are very cheap) and there's a chance it may not even be available on DVD, or in today's case in America. The local Half Priced Books has a short stack of laserdiscs available and to my luck they've been carrying Japanese imports in that stack. Without even knowing if there was going to be some region locking on the discs or if there would even be subtitles I picked a few up. Sending me to a whole other level of dweebiness.
So that brings me here. I want to give you my impressions on a movie that I cannot even understand audibly. I will do this for each of the laserdiscs I get that have this same... disability? Today's choice is Sora ga konnani aoi wake ga nai. Also known as Sky Cannot Be This Blue, or The Sky Does Not Ought To Be So Blue according to what looks like a rough translation stickered onto the laserdisc case by the previous owner, or the store that sold it. But apparently Sky Cannot Be This Blue is the literal translation so who knows that this would have been called if released internationally. Probably something like Why is the Sky So Blue? or The Sky Cannot Be This Blue, making it less rough to say or read.

I wanted to know as little as possible about the movie before I watched it to give it the best experience. But I did wind up doing a bit of research before hand. However I find next to nothing on it. This is what I do know.
This is currently the only movie directed by Akira Emoto, who has been acting as early as the 70s and is still acting in new movies coming out in Japan. As a sidebar he was in the 1996 movie Shall We Dance, which was later remade with Richard Gere and JLo. While I've never seen the remake, the original Japanese movie is damn good. DAMN good! Sky Cannot Be Blue was released February 20th 1993 only in Japan. I haven't been able to find any sort of box office details or critical responses. Since this was Akira Emoto's only movie he directed maybe that speaks for itself. But there could be far more to it than that.
The only other thing I know is the plot proper per AsianWiki: "Kantarou Kobayashi is an ordinary businessman who has multiple troubles on hand. He's been having an affair with a woman working in the same company, but she does a lot of eccentric things. His wife has no interest in anything but her plan to build a new apartment where their old house is. His son suffers skin eruptions. His mother appears to have senile dementia." Yeah I thought whoever wrote that plot summary did a shitty job, too.
Right from the surface this movie looks like a comedy. It's very present from the box art. Heck it even hints that there may be a bit of wackiness going on here. 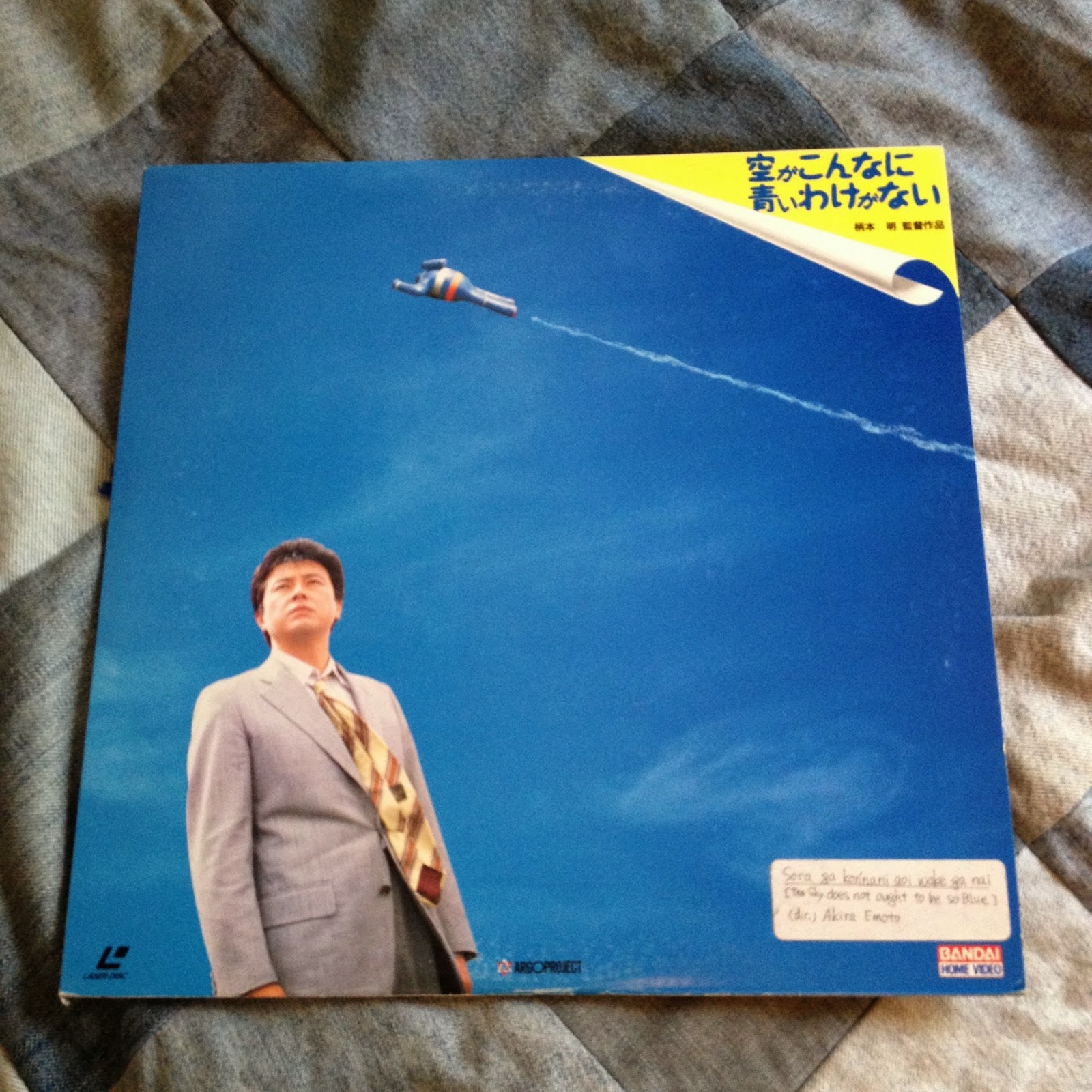 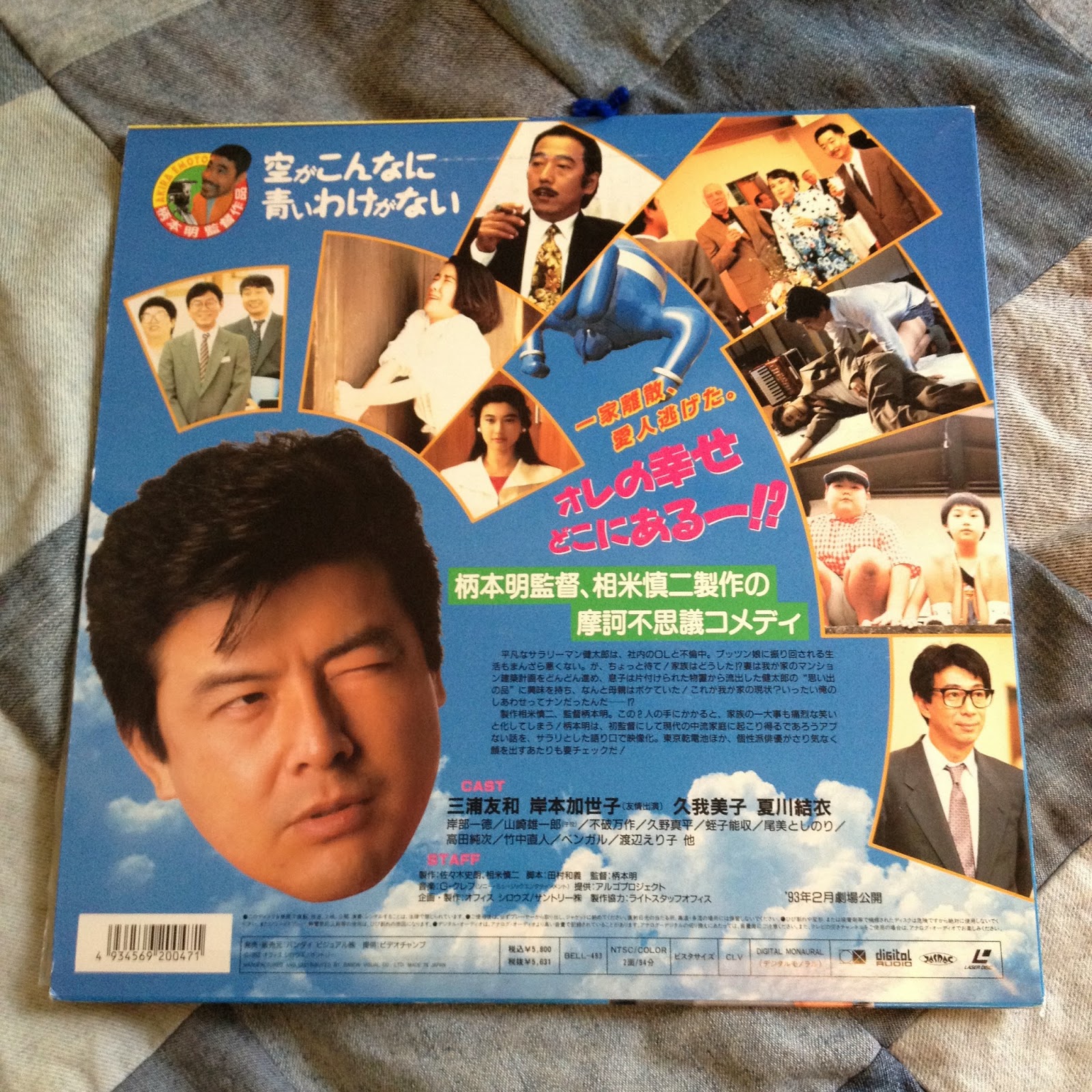 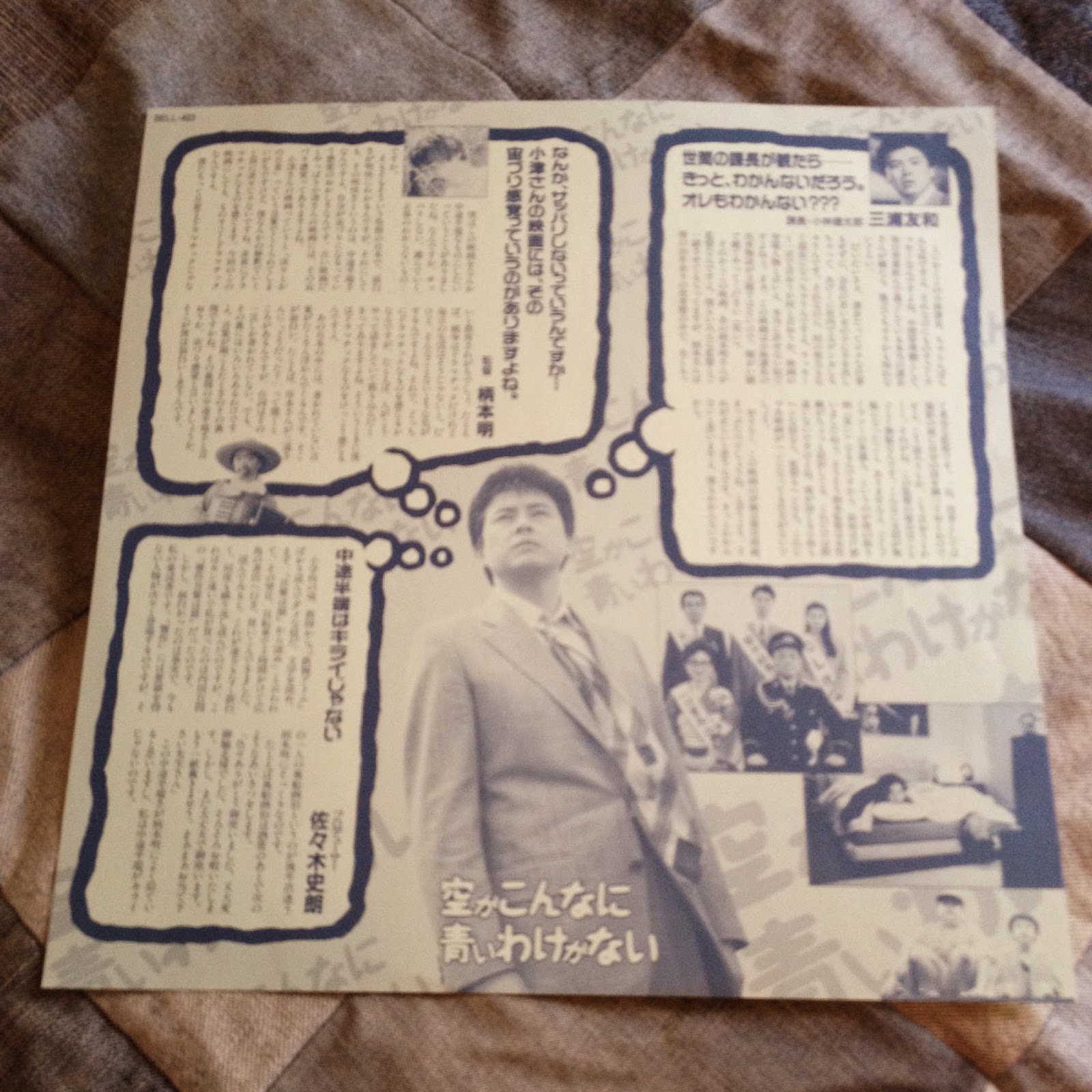 Even the insert felt wacky!

So I throw it in and off we go. As the movie begins I almost feel like I'm experiencing something (I could have by now) I wanted to experience for some time. When I watch movies with subtitles I try to imagine how it would be for the people int he native country, seeing it as normal as we would see the new Thor movie in English. It takes me to a different culture when I put myself in that mindset. I liked seeing everything in it's native Japanese. Super cool, super fun, super stupid to some people. Shut up.
The first thing I realized was if there was as much comedy as I think there was there had to be a lot in the dialogue/dead pan delivery. Majority of the acting was done very straightforward or so it felt (remember, can't actually understand them). The opening scene shows our hero's family sitting down to a meal with the wife off the side, on the phone. Again the deadpan delivery of the family is present. But I imagine much of that is in reaction to the dialogue the mother is making on the phone and how it's supposedly so much more important than spending time with her family. It's a good introduction to how lame the rest of the movie would become.

I realize it's not fair to say but I really didn't care for this movie a whole lot. And I think that's easy to tell from what I've seen. Granted it is possible the dialogue could redeem the movie from the otherwise drag experience I had with it. After all, Wes Anderson's movies are very dialogue heavy and if someone couldn't understand it then I imagine those would be boring, too. Especially since some people think that already of stuff like The Life Aquatic. But the overall tone of the movie. The way it appears to handle itself. It came off as very dull and I couldn't see redeeming itself. And I believe that's because of how... well, 90s it is.
To all my friends who have a lot of video rental store memories. Have you ever experienced this situation? You're at Blockbuster or Hollywood Video or whatever your local video store was with your parents looking for a movie, and you come across some movie you've never heard before. Since this was before the internet was available everyone including up my ass you take a shot with it cause the box art looks funny, there are a few good reviews on the back, and it looks like it could be a good time comedy. Then you take it home and the comedy is so spread out it becomes an agonizingly long experience. How the reviews were clearly picked from very select reviews because they were the few that actually liked the movie. Then how the box art was done up in a way that made it look way more exciting than it actually is. It's a bummer cause sometimes that was your movie for the weekend. The exciting Friday night you've been waiting for and worked really hard on your math homework and now I'm making this super personal.
But that's how this movie came off to me. It's like it was a drama that wanted to be a comedy, but since it was still the early 90s there wasn't the concept of a good dramedy yet.

Again it's a bit unfair for me to judge it so harshly when I can't actually judge it properly. Still a bit part of a movie is tone. There are lots of movies you can watch with the sound off because they're either that easy to follow, or even that compelling where you'll still get an experience without having the fullest experience. This was neither of those. The visuals that went along with the dialogue just weren't exciting or gave signs of compelling. As a matter of fact most of the time it was heavy on what felt like drama with very little comedy. And if there was comedy in the dialogue then the comedy was very all over the place. I say this because there were times when there was visual or more in your face comedy that was so wacky it was damn near painful.
Still without understanding the dialogue the movie got really predictible. It did indeed feel like a typical comedy with dramatic elements from the 80s/90s if you know what I mean. Trying way too hard to be funny in the comedic sections while trying way too hard to be serious in the serious sections with a change in shift that is more jarring than a slap to the face. Very typical stuff here. Yes of course it would be a different experience (potentially) if I watched it with subtitles but I'm not dedicated to the idea enough. It was hard enough finding information on this movie at all which means a DVD would be even harder. As far as I can tell it never hit the states. Tracking down an import DVD is not something I'm ready to invest my money in.

Not a great introductory movie to this new segment. Also a shorter post in comparison to my last (took me quite a while to finish my write up on Noah). It does somewhat serve a purpose to what I was going for, though. Pick a movie where all I can interpret is the tone, body language, and everything else visual with limited tonal representation (screaming, laughing, etc). And in a way it delivered. I was able to formulate a specific opinion without understanding a single word of dialogue. I just wish the movie was a better one. But let this serve as a preview.
I have at the moment two other Japanese laserdiscs to go through for this section with more on the way I'm sure. The next movie I want to do is Suwarôteiru (or, Swallowtail Butterfly). A movie that I already know I'll get more out of because of a slight cheat. While the movie is Japanese it also has a lot of English in it. That'll give me a different sort of perspective in interpretation by understanding a portion of the words, giving more mystery to what they're saying elsewhere. Then after that I will do Trafic (Not a typo. There is only one 'f' in the title), which is actually a French film. I just so happen to have the Japanese laserdisc of it. Double foreign.
After that if I run out of options or I don't have the cash to get more imports I could always improvise with a few others I have. Like my laserdisc of Monty Python and the Holy Grail that includes a Japanese dub track. Do the old switcharoo on that.