The Dumb and Dumber To Trailer & Unhopeful Expectations

Remember when there was a prequel to Dumb and Dumber and it was shit? Probably because it didn't feature the heavy hitters of Jeff Daniels and Jim Carrey. Well...

...the following trailer was just released


There was a time when Jim Carrey was pretty close to the greatest thing in the world to me. I loved everything I could get my hands on. Both Ace Venturas, The Mask, Liar Liar, even Batman Forever (I was quite young), and of course the first Dumb and Dumber. I dressed up as Ace one year for Halloween. Hell, I even wrote him fan mail and got a signed photo back! As I grew it felt like he was doing the same. His work became far more mature. He was in less silly comedies where his but talks and more movies about serious shit. Remember The Majestic? It's a beautiful movie that he starred in around the same time he was acting goofy in The Grinch (oh don't get me started on that garbage). Then the modern classic Eternal Sunshine of the Spotless Mind. Even The Truman Show was part drama in many respects.
It's as if Carrey realized the world was growing tired of his style of comedy and his choice in movies was showing he agreed. Sadly this didn't work out in the end. How many of his movies have you actually seen in the last 10 years? Zip to none I'm sure. But the thing with his style is it's something that only really works for a little while. It's not exactly a style that lasts forever. Not that it's irrelevant after time like poorly aged comedies that rely on reference. Carrey's is just a style that gets old after enough repeat viewings. I remember feeling that when I saw him in The Incredible Burt Wonderstone and sadly that's what I see in the trailer above.

Sooooooo.... Dumb and Dumber To. I did briefly mention my thoughts at the end of last year in my 2014 preview post. I commented how it's an obvious re-ignition of the original idea. Strangely I said I'll at least give it a chance (a one in a million chance... saying there's a chance...) but after this I just don't know. I find it hard to believe this is the "worthy successor to the comedy classic." And the trailer proves it. Really if there were to be a sequel to it, it should have been made no more than fifteen years ago. A few years after initial release at most, not twenty years. They have gone well beyond the Hangover method of sequel and have dove head deep into Basic Instinct 2, Dirty Dancing: Havana Nights, and Blues Brothers 2000 territory.
"But they have the original cast! Original directors! Original everything!"
Yeah, yeah, yeah, I know everyone is back. That alone is great. At least there's no awkward moves here where one actor was too stubborn to return forcing them to make a new character that serves as a replacement. None of that crap. But even with the original everyone and everything back I just don't have faith in this.

I really hope this isn't nostalgia taking over (I can't stand that kind of stuff, writing a post about it), but the original movie had some brilliantly written material that was actually on a certain level of subtle. Which is what I'm having trouble seeing here. That automatically makes me sound pretentious. Let me explain. The original was definitely loaded with goofy beyond goofy, explosively trying to be funny bits. If anything it had those more than anything else. Somehow it worked and worked well. Yet there were comedy was done in (what I believe) is the best way possible. The actors play the characters straight (or as they should act) and let the dialogue do the work. When someone tries to be funny it's less impactful. Have you already forgotten about these great moments done well?

"I can't believe we drove around all day, and there's not a single job in this town. There is nothing, nada, zip!"
"Yeah! Unless you wanna work forty hours a week."

"So you got fired again, eh?"
"Oh yeah. They always freak out when you leave the scene of an accident, you know?"

"Yesterday was one of the greatest days of my life. Mary and I went skiing, we made a snowman, she touched my leg..."

But as funny as I once found the original it has lost much of it's charm on me. Obviously some bits won't make me laugh as much as they used to. Some bits make me laugh more than before because of the hidden jokes or the smarter dumb jokes I didn't notice before. While at one time I split my sides open laughing at the laxative scene. I now laugh much more at lines like "Yeah I called her up. She gave me a bunch of crap about me not listening to her, or something. I don't know, I wasn't really paying attention."
Now what does all that mean for the sequel? Judging by the trailer it seems like the qualities of the first will not be there. Not even close. Does it have to be the first movie? No, not a chance. If I wanted to see the first movie I'd watch the first movie. This doesn't have to be a repeat. I wouldn't want it to be. Which is ironic considering the trailer has multiple joke repeats from the first movie. And of course they're on another road trip kind of an adventure. So weird how the trailer presents the movie not enough like the first in some ways, but too much like it in the worst ways.

I'm sure plenty of people would read this and say, "It's just a stupid comedy about a couple guys being dumb! Just turn off your mind and you will enjoy it! Quit overanalyzing!" And I would disagree with those thoughts. It's not just a stupid comedy because, believe it or not, stupid comedies can be crazy smart in their writing. Not necessarily what the characters are doing or saying are smart. More so how it's put together. Making the jokes as funny as they are. This feels like a pathetic effort to recapture a spark that happened twenty years earlier. Just because it's being revisited doesn't mean it'll be good.
In a way it reminds me of when Vin Diesel dropped out of the Fast and Furious movies after the first to make xXx and Riddick. He clearly wanted to vary himself instead of sticking with the same thing. Then suddenly he wasn't on top of the action world anymore. Was it a coincidence he started showing up in the Fast and Furious movies again? I think not. Not saying this is true for everyone involved here... but...
In the first movie it was kinda hilarious seeing the way these guys dress and present themselves. It was obvious they didn't care a lot or didn't know any better. Since they were younger characters it was charming in a way. Like how they haven't grown or matured enough to tell. There are people out there in their late 20s, maybe early 30s like that. So seeing a satire of it can be pretty fun. But here we are all these years later. Carrey is in his early 50s and Daniels is approaching 60. Still seeing these men dress and present themselves the same way they did 20 years earlier looks kinda sad. All the wrinkles and other obvious downfalls of aging. It's not so much a satire anymore as it is a desperate attempt to cling to youth. Going so far to wear the exact same outfits.
Which brings me back to the Vin Diesel comparison. I know for a fact there's been talks and rumors of a Dumb and Dumber sequel for ages. Isn't it a coincidence that Jim Carrey finally agreed to do this many years after his last hit movie? I'm surprised this wasn't done sooner. Jeff Daniels isn't exactly on top of the world but he's been in some dang good movies. More than Carrey's been in the last ten years or so. Daniels has Good Night and Good Luck, The Squid and the Whale, Looper, heck The Answer Man wasn't bad and I hear The Lookout is pretty top notch! So he didn't necessarily need this movie but he's doing it anyway. Carrey has... Yes Man (which was good) and Bruce Almighty. Everything else just wasn't hitting the pule of America (one may say).

I could keep rambling for a long time. So I'll end with a few quick points.
The trailer makes the movie look cheap. Not indie cheap, it looks apathetic cheap. Thrown together with little care. Like it's one of those Epic/Date/Scary Movie movies. Not to mention they're clearly going the vulgar route this time around. There was only one joke I really appreciated in the trailer and that was at the start. When Harry visits Lloyd in the mental hospital and finds out Lloyd has been acting crazy the last twenty years as a practical joke. Beyond that none of it did it for me because they were trying way too hard and it was vulgar for vulgar's sake. Like a cat with two butt holes and Lloyd reaching under the covers of an old woman's bed CLEARLY reaching into her kooch (unaware at first) finishing by pulling it out and blowing the dust off his hands.
If that's what's in the trailer I can only imagine what'll be in the actual movie.
The only other major thought I had (that I want to reiterate) is they took the wrong route with making a sequel. I'm sure a lot of people would disagree with me but I think the Farrelly brothers should have taken a lesson from Kevin Smith. Clerks II was released 12 years after the first movie. A movie done as cheap as cheap can be for a guy working at a convenience store in the early 90s. Strangely it was well received which I don't think a lot of people expected. Why was it so good? Because it was both a straight sequel and spiritual sequel. It didn't just continue the story of Dante and Randall, it expanded it. It made new, unique jokes instead of rehashing the old ones. It changed a few things but for the better. It was a top notch sequel. Words rarely used in reviews, especially in comedy.
Seriously, how many comedy sequels are worth a look at. Not good compared to the original. I mean how good are comedy sequels in general? Think about it. Most of your favorite funny movies either had the one installment, or you thought the sequel sucked.
I have heard good things about Anchorman 2, though, but that's for another day.

In very short, Dumb and Dumber To is an unnecessary sequel that is sure to disappoint. 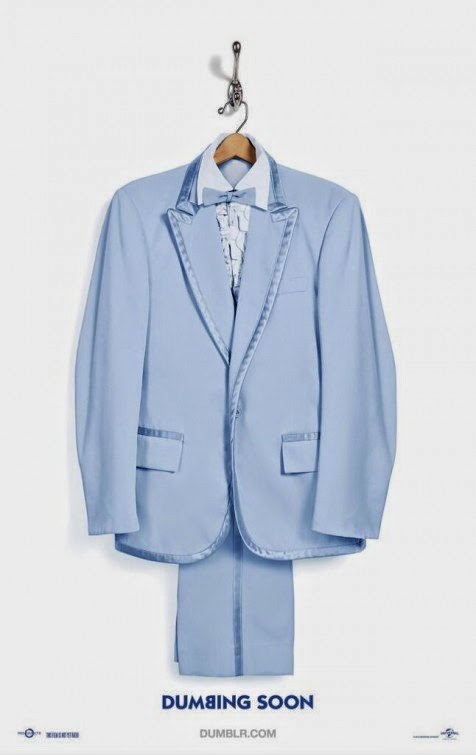 I did like the teaser posters. I will say that.
Posted by Thirsty->Cat at 7:55 PM