The Second Disc: A Good Use of 3D?

You know... just when I think I've seen everything, something comes along that gets me as excited as I was when I first discovered how film can be art. A rare occasion that equally rarely lives up to the hype whether built internally or forced down my throat. What gets me the most excited is when I find out about something that may have otherwise flown under the radar, missing me entirely. The latest to do this is Jean-Luc Godard's new feature, Goodbye to Language. 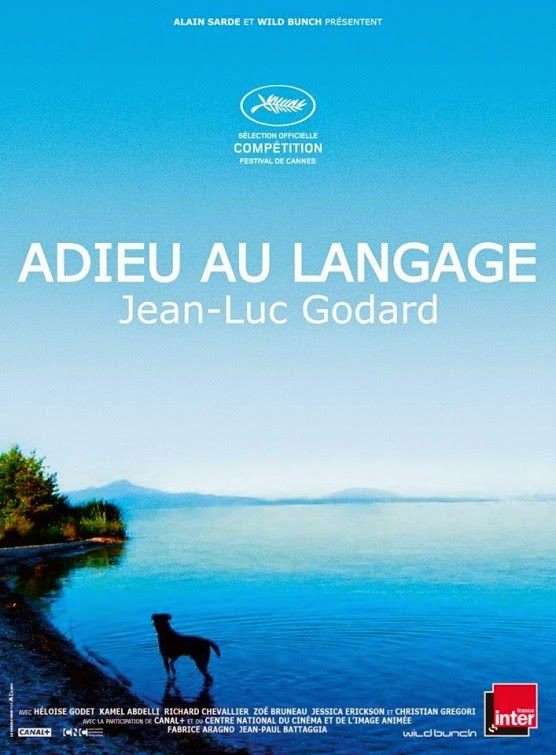 Am I excited because this is the newest movie from a legendary director? No. Actually, I looked through his filmography and somehow I've never seen any of his films (as far as I can tell.) A little embarrassing since I consider myself to be a huge film buff. Whatever. It's not always what you watch but how you appreciate it. I still haven't seen Casablanca or Citizen Kane so let's get beyond the 'Film Love 101' bullshit and get to the point.

The reason I'm interested and excited is because of... 3D...

I usually take every chance I get to bad mouth 3D. It's a dumb gimmick that rarely works. When it does work it provides a limited time spectacle because you'll quickly be distracted by how dark or blurry the screen is. Whereas when it doesn't work everything looks like a diorama set or you see double. Sad considering 3D has been in and out of film since at least the 1950's, if not sooner.
[Editor's Note: The earliest 3D film screening dates back to 1922. It didn't become popular until the 1950's.]
That's a lot of time with little improvement. That's almost like if movies didn't go from B&W to color, but went from B&W to almost color, adding a few primary colors every couple decades.

Like other innovative ideas it usually takes a couple risk-takers, or experimentation that either does or doesn't work out in order for it to catch on. Even things like close ups and jump cuts required some people to think outside the box and experiment despite the technology being there under their noses.
In a way that's what Goddard aimed to do with this new movie. He's took the really old technology of 3D but finally put a new spin on it, or so I hear. I haven't actually seen the movie. Hence why this isn't a 'review.' Just a report of what I've read and why I'm fascinated.

Sadly there's not a ton of information about the film. Even the Wikipedia and IMDB page is surprisingly thin. In a way that's fine since overexposure could ruin the experience you would eventually have. Not that the plot or anything else is important in this post. We're talking about the 3D.

I know only so much about the technical aspects of 3D. So I can't say for sure how he did some of these things. This is just a report on what I've read.
For one, Goddard found a way to enhance the depth of vision in the 3D, figuring out how to make it work closer to the way human eyes actually work. Going back to the diorama commentary, I've noticed how in recent 3D movies there's only been a couple layers before hitting the flat background like it's a video game from ten years ago. And while I hadn't seen a 3D movie in a couple years, I coincidentally saw three movies in 3D just this last year to varying results. Godzilla, Edge of Tomorrow, and X-Men: Days of Future Past.
Even though I felt X-Men was the best example of the three I still felt the 3D came and went in quality. Partly because of that lack of layers and very flat background. According to the articles I read on Goodbye to Language, Goddard found a way to utilize many more, as high as SEVEN OR MORE layers! It adds a sense of depth modern cinema fans could go ape shit over. And this was done in an art film without a fucking RED camera and trillion dollar budget.

It's really good this 3D came from this director and that it's an art film. In a way that allows the obvious visual style shown in the trailer. Which I will lay out right...

It has that low budget indie look to it. You may even be asking, "How the hell could that do 3D well?" Which is where the visual style works in it's favor. The film runs at a higher than usual framerate. To put it in perspective, most movies run at approx. 24 frames per second. That's partly what gives it that 'cinematic' look. When it runs higher it gives something of a 'home video' look to it. Which is why the movies you make on your iPhone look different than even the found footage movies. They run at a different frame rate so they look different.
When movies run in a higher frame rate they tend to look better in 3D and this is no exception. And having that 'home video' style intentionally done raises the 3D to a better level, which can only really work with an art/indie film like this. A couple years ago when The Hobbit Part 1 came out a lot of people complained how fake it looked compared to the rest of the LOTR movies. That's because it utilized a slightly higher frame rate. It's a tricky thing to get around and you'll likely sacrifice one thing for another but never fully achieve both.

Next, to state the obvious, 3D is filmed with two cameras side by side because that's how eyes work. Goddard's most notable experiment here was doing something simple but not so obvious. Separating the two cameras filming not as centered, sometimes filming entire scenes in different rooms. He messes with your vision but, from what I can tell, achieves something wonderful and unique.
To explain further... Goddard would keep one camera steady on a single object or action, like a chair or someone playing the piano, then go elsewhere with the other camera. If you watched the trailer you'd notice a couple moments had a blend of two images. This is the park I was explaining. Apparently when your mind tries to mix the two into a 3D image (like 3D normally works) it makes an incredibly unique image.

And that's a quick introduction to what reports are claiming Goddard does with the tech. The plot of the movie could be hit or miss seeing as it looks experimental and potentially pretentious. Something I would have automatically liked when I was first starting college. The way I see it, it doesn't really need to be a well written or well executed movie as long as it can prove more can be done with the technology. The story and almost everything else can take a back seat, so long as the visuals and the advancement of the tech get center stage.
May sound hypocritical since I've complained many times in the past about modern movies being a big, stupid spectacle with no substance. That's different. Stuff like that (like the Transformers movies) are a clear cash grab from the start. Goddard didn't do Goodbye to Language for the money. He did it for the art and experimentation.

Without a doubt this is the most interested I've been in 3D. Period. Still, the saddest part of all this is I may never get a chance to see it. While the city I live does play more obscure titles now and again it doesn't play as many as it used to. Even the Sundance theatre here plays a ton of mainstream movies with a few artsy ones in the mix. If it did come here I would be first in line! And watching it at home wouldn't be the same. Sure I'd give the movie 'as-is' a shot but it wouldn't be the full experience. Lastly, I doubt 3D TVs with a 3D blu-ray player could achieve the dept of 3D Goddard uses in this. Something tells me he experimented with high end equipment that can only be done theatrically with limited results at home.
...just a hunch.
Posted by Thirsty->Cat at 5:06 AM