The Second Disc: When a Franchise Ends, or My Thoughts on the How I Met Your Mother Finale 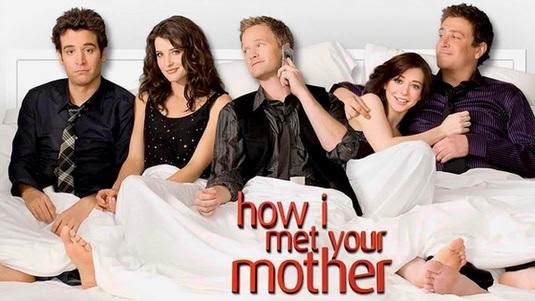 Yeah, yeah, yeah, I know, the finale aired back in March. But I don't have any form of cable setup in my apartment, basic or whatever, so Netflix is where I get a lot of my entertainment. So I realize this is a belated response, but maybe not for all of you. Especially if you're like me and prefer watching shows when you can actually control when you watch it. A shame it took six months for the final season to hit Netflix... but oh well. At least I got to see it the way I like to.

First, for context, my perspective on the franchise as a whole. If you don't care about that and just want to know what I thought of the ending then scroll down to the BIG BOLD LETTERS that scream ENDING!

Obviously I enjoyed the show a lot if I went through all nine seasons of the show. My easiest review of those seasons is that it's definitely a step above the typical studio audience sitcom, despite essentially being what you'd expect at the same time.
I liked the unique approach it took. It had a very clear intent from the beginning. Technically told entirely in flashbacks with the occasional flash forward to show how key moments play out years later. In fact, the thing I liked most is the flash forward element. It set certain details in stone, forcing the writers to head that direction without jumping the shark too hard along the way.
It's a shame the characters we're supposed to care about were a mixed bag. The show revolves around Ted Mosby. A single fifteen year old living in a thirty-something's body looking for his one and only. While this is his story, his portions are far less fun and interesting than the other characters. When you've got a great couple like Marshall and Lily, for example, it's hard to compete.
To keep this portion short I'll say this is one of the few modern TV comedy exceptions in my book. So many sitcoms are popular yet forgettable. So for one to rise above the ashes on a major network that says a lot. While it was spread thin in maaaaaaany spots keeping each season at 20-24 episodes each I still found all nine seasons of HIMYM more enjoyable (and definitely more dramatically pleasing) than the six seasons of The Big Bang Theory I've seen so far (another sitcom I enjoy, just on a different kind of level.)
Then we get to...


THE ENDING!
I'm definitely not alone in saying the ending was a disappointment. Fans exploded anger after it aired and I can understand why.
For those who need a reminder, or just don't care enough to watch (but are reading this for some reason) here's what happened... Most of season nine was the weekend leading up to Barney and Robin's wedding. After the usual up's and down's the group goes through the wedding happens with everyone learning a lesson about themselves and one another (it really does boil down to it that easily every season, doesn't it?) There are tons of changes happening in this finale. Marshall and Lily are moving to Italy for a year, and a surprise no one in their group saw coming, Ted is moving to Chicago for a new job and a new start. Ted is damn near on the bus out of town when he takes a shot at talking to the bass player from the band at the wedding, waiting at the same bus stop (already set up as 'the mother.') Ted decides to stay in New York.
The final episode is a two parter. Barney and Robin's marriage fail after three years, Barney then knocks up a girl and becomes a dad, Marshall eventually gets to be a judge around the time they are expecting their third kid, and Ted and Tracy ('the mother') have been engaged for five years with two kids. They get married, quickly detail some more of their life in a montage, show she gets sick and dies, "and that, kids, is how I met your mother." But it doesn't end there. The kids point out how most of the story was about Robin, saying it's obvious their dad still has a thing for her. "Dad, it's been six years since mom died. Maybe it's time to move on" the daughter says. Ted gets the iconic blue horn, stands outside Robin's apartment window and... that's it. Suggesting he finally gets the girl he's been after.

The immediate and most obvious response is how tacked on it feels. The two part episode spent forty minutes time telling you how everything has changed and will never be the same. It flat out tells you what happens to them and how happy they become later in life. Then they throw it out the window and say, "Nah, Ted is still the same. He still loves Robin. Go get the blue horn and call it a day."
It's an ending that only makes sense as an attempt at fan service. Fan service that obviously failed since the core audience went nuts with anger. That and it's a cop out ending. So many sitcoms end the way you'd expect them to in the most predictable way possible. This being that cliche only done in a slightly unexpected way.

But of course the biggest sin is that they tacked on this cliche ending just after they did something few sitcoms do. Give a satisfying end with characters that actually grow and change for the better, even in a realistic way in some aspects.
The ending is such a step back in terms of growth.

I spent nine seasons not really liking Ted. I always felt he was too whiny and annoying. Which is fine in some cases, for a lovable loser, only I didn't find him very lovable. Which is bad because when you fail to make a lovable loser all you're left with is a loser. I was rooting for him for the sake of the plot of the show. It got pretty interesting from time to time when he'd date a new girl. It gave you intrigue, wondering if this was "the one," making you think like Ted. But I never felt he grew much until the last season.
Then he kept falling in and out of love with Robin. Someone I was down with at first only to be more annoyed the more Ted obsessed. She herself would have doubts if she should or shouldn't be with Ted. Putting him through constant annoyances, dragging him through the dirt, never giving a straight answer.
Then at the end Ted changed. It was a nice change. Finally a new Ted. Almost everyone else in the show had growth and change. Marshall and Lily most of all (while retaining that youthful goofiness about them.) Even Barney had a lot of growth throughout the years. So in the final moments of the show when Lily says, "No, this is different" it actually FELT different!

So when the story goes through the very well done two part finale only to end with the most predictable and insulting (to the characters) way possible... I, too, felt disappointed.
I felt having Ted wind up with Robin was an insult to the beautiful relationship they developed between Ted and Tracy. A love story that was told in less than half a dozen episodes that was leaps and bounds better than the season after season of falling in and out of love of Robin. The biggest reason being that it felt far more realistic and passionate. Whereas Robin felt like a high school crush that took him way too long to get over. Someone he fell for long before he grew up and finally became a man.
So instead of taking the great ending they had (Tracy can live or die... whatever) they take a plot device that kept the show running for years and called it destiny because of how much he obsessed. That's not good writing, that's convenient writing. Convenient writing that renders Ted's relationship with his REAL love of his life completely moot. So just because Robin said "Maybe I should be marrying you, Ted" in a late, late episode that means she's justified a relationship with Ted? No, not a chance. She had her chance and she screwed up. Ted's an idiot for wanting to deal with that train wreck again, even if his wife died.
I would be more okay with the ending if the same thing happened but he wound up with someone else. I understand as people get older, their spouses pass, and they re-marry for companionship. This didn't feel like that. This felt like his relationship with Tracy barely mattered, and that it was something to go through just to get to the grand prize known as Robin.

In super short... Robin doesn't deserve Ted, Ted should not have gone to her after he already married the love of his life, and it should have ended when he simply said, "and that, kids, is how I met your mother."

I did see the leaked alternate ending. Closer to what I wanted. Even went so far as to have Ted say "everything I did lead to this point." So much better. Not much else to say about that. The alternate did it better while the canon ending did it wrong.
Posted by Thirsty->Cat at 5:08 PM