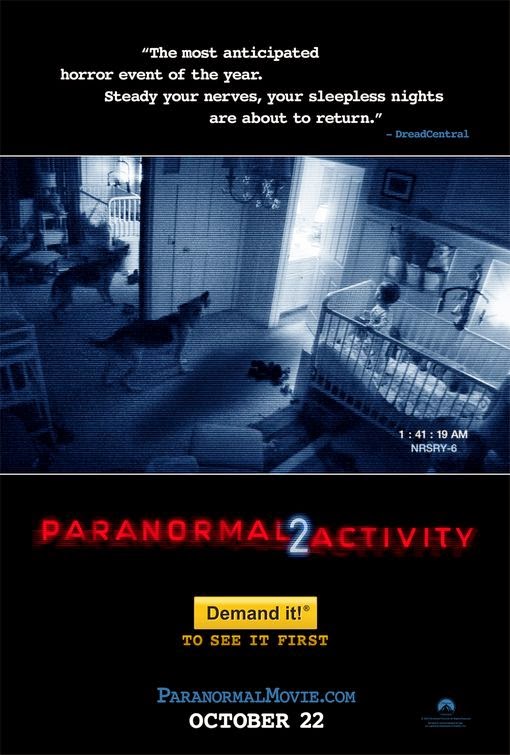 History: As a surprise to no one this sequel came out a year after the original was mass released. And while it has a '2' in the title, this movie serves more as a prequel than a sequel, with events taking place before and during the events of the original but in a different home.
Peli did not return as director but did stay on as a producer, something he would do for every Paranormal Activity after this. The budget was also raised but kept at a Hollywood modest $5 million. Despite the price jump it kept a similar approach to the original, keeping the 'found footage' style instead of a traditional style.
It received mixed reviews but more positive than negative, mostly because it was very similar to the original and didn't cover much new ground. But it was nearly as successful as the original financially, bringing in $177 million. It also broke box office records at the time by holding the biggest R-rated midnight gross and the biggest horror movie weekend opening.

Personal History: Only saw this once before when it was in theatres fall of 2010.

Review: This was bound to happen. It happened with Saw, an independent horror film that got attention at festivals, and built an entire franchise around it. In time I would notice similar trends between this and the Saw franchise, while I'll discuss as they come, especially the bad, but that also means it had the potential to be a fun and creepy ride. I liked most of the Saw sequels. Even their first sequel was pretty good all things considered.
Paranormal Activity 2, however...

The last time I saw this was in theatres. My thoughts at the time were "better than I thought it would be but still not great." I didn't not like it. So going in I imagined it'd be a similar experience. Sadly that wasn't the case. Not like I had high expectations on my second viewing. It was all based on remembering I enjoyed it the last time I saw it... a little over four years ago.
I'll cut right to the chase here... I feel Paranormal Activity 2, minus the stuff that connects it to the first movie, is exactly what Hollywood would have made if they chose to remake the original.

In case you didn't read the History section in part one of this extravaganza, the original plan was for Paramount to buy up Paranormal Activity, remake it for mainstream markets, and release it that way. Until they realized the movie that played at festivals was so fucking good and they should release that one as is.
So when sequel-time came it was no more a shoestring budget indie movie and the budget was inflated. Not to absurd proportions. $5 million is very low for major studios and makes for easy success. Still it was supposed to be a sequel to a movie that had a lot of it's charm and scares by working so well within their restrictions. And now they still have to work within restrictions, but with more cushions and professional help.

The biggest problem with number 2 is it tries to replicate number 1 in too many ways. Would it be a similar experience for these new victims if haunted by the same demon? Of course. But the same experience? Especially when they act and react differently than Katie and Michah? Not a chance.

It is almost beat for beat the exact same thing that happens in the first movie. There are small signs of a presence early on but nothing that couldn't be written off by logic and reason, giving little reason to be worried or jump straight to demon. But since this family has no reason to have a camera outside of fun with the family the writers had to come up with a reason to have cameras watching at all times. What they come up with is clever, but how they get there is clunky.
One of the first big events is their house is broken into for unknown reasons by an unknown assailant. Their house is trashed but almost nothing is stolen. The only thing stolen is the mother's bracelet that was given to her by her sister Katie... see where this is going? As a reaction to this break in, the family goes completely overboard with security by installing hidden cameras throughout the house.
Clever way to keep an eye on things but unrealistic if you ask me.

It's through these cameras we see the terror begin... what little there is that's actually interesting.
I cannot stress enough how much this feels like a remake of the original rather than a sequel. And in this psuedo-remake so much of it has been neutered and streamlined to include lovely modern horror cliches such as a child/animal (both, actually) who can sense the evil presence more than the adults, the foreigner who knows more about casting out demons than any lifelong priest knows, and a ritual/seance-type attempt to drive out said demon. This along with attempting to do the same scares but bigger make the whole thing feel really unoriginal and not scary in the least.

It also doesn't help the characters are uninteresting and unlikeable.
The stars of the show are definitely the baby and the teenage daughter. The baby is a baby so there's not much to say. And the daughter is a modern teenager so obviously everything she says and does is bullshit. Teenage girls can't be trusted, right? Well that's what the dad seems to think.
Speaking of the dad... he reminds me of Micah... he's an idiot, a terrible husband... but unlike Micah... the dad is a straight up asshole. I swear, every time he's on screen he's either annoyed, pissed off, or being a jerk to his family. Like when he plays a practical joke on his poor wife after she was legitimately terrified by something that was so obviously supernatural the husband should have noticed. Yes, this idiot looks at recorded footage of very real supernatural happenings and he chooses to pass it off as the wind or some such shit. All leading up to the obvious cliche of not being concerned until it's too late when he calls their foreigner maid into the mix so she can tell them HOW TO DRIVE OUT A DEMON!

WHAT?! If a professional psychic or whatever the hell that guy was in the first movie couldn't help Katie and Micah how the hell does this lady just happen to know how to do this? AND IT WORKED! I'm sure that's something that'll be explained in The Marked Ones since that has a Spanish setting (as I'm writing I still haven't seen The Marked Ones.)

So, yeah, spoiler alert they find a way to drive out the demon but it can only transfer to a relative of the possessed. The asshole's wife is Katie's sister. They drive out the demon so it can enter Katie. Oh yeah, did I mention Katie appears multiple times in this movie? And she hasn't had her "experience" yet? Did I mention this is a fucking prequel?
Yep. Paranormal Activity 2 is a prequel that supposedly shows the events that lead up to the terror we all know and love in the first movie. I wonder who thought this was A) necessary and B) thought it would work. It has the Star Wars prequel effect of deflating the mystery of the original by explaining things that didn't need to be explained (which is even worse as these sequels go on from my memory of them.) Not to mention a lot of what happens here raises other questions that never get answered because they weren't thorough enough in their "expanding" of the universe within this franchise. Like why do they give the impression that Katie didn't experience this presence in her adulthood until they drove the demon out of her sister when in the first movie Katie clearly explains it is something that has followed her for year and years?

Wow. I have a lot more deep seeded hatred for this installment that I thought I would. That's probably because it's a sad excuse for a sequel and an even sadder excuse for a prequel. It adds little to nothing to the franchise outside of an open door for more sequels. The theatrical release of the original was open ended, and this one also ends open ended when Katie comes, kills almost the entire family the same night she kills Micah, and abducts the family's one year old baby. Roll credits.

I'm probably giving this one a harder time than it deserves. If it was it's own movie released outside this franchise it would probably just be a mediocre demon possession story. But since it's part of this franchise and doesn't just fail to comprehend the right tone and approach but falls flat on it's face in comparison to the original... kinda makes it hard to like.
I will say there were some good, creative aspects. Like I said earlier I thought the use of security cameras was a clever approach along with the traditional handheld camera. There were also a few cool tricks done by the demon that didn't exactly scare me but caught my attention. Also I liked how the demon's presence was generally speaking very subdued. Something I can't say for the rest of the franchise... of which we're yet to see the worst of.
Posted by Thirsty->Cat at 4:49 PM