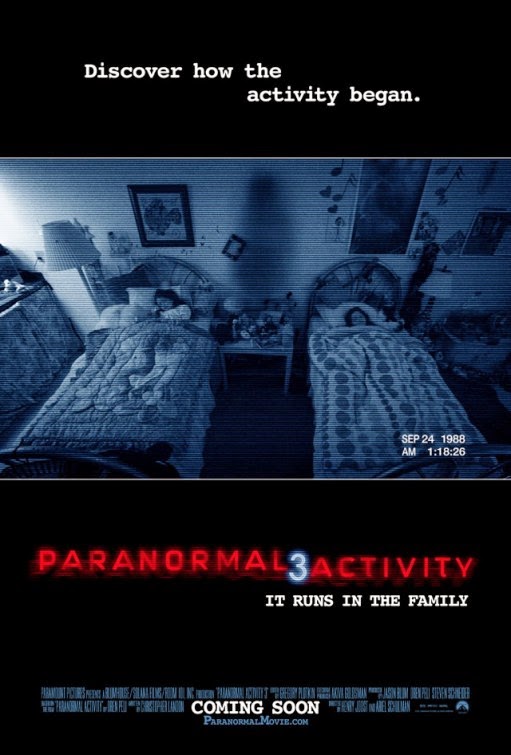 History: Produced and released a year after Paranormal Activity 2, making it another annual holiday tradition much like the Saw franchise which had it's final installment released around the same time as Paranormal Actity 2. This installment was another prequel rather than a sequel. But this time it went back to the late 80's when Katie was still a kid. Giving an origin story of when the demon started haunting her.
Financially it became the highest grossing in the franchise, raking in a little over $200 million worldwide. Also it broke another midnight opening record for a horror film previously set by it's own franchise a year earlier, raking in $8 million in a single night. While not as highly praised as the original, it got slightly better reviews than the last installment.

Personal History: Only saw it once before via Redbox. Skipped it in theatres since 2 was pretty much just OK so I didn't have much to get excited about for 3. However I remember really enjoying it when I rented it. A lot more than 2.

Review: Once again this franchise moves back in time with a sequel that's actually a prequel. However, unlike part 2 which was a prequel showcasing Katie's sister's family and their experience only weeks before Katie's, part 3 takes us all the way back to the 80's when Katie and her sister, Kristi (who I never mentioned by name in part 2, my bad), were kids.
A logical and smart move especially since this goes all the way back to the first movie when Katie talked about how this presence has been around since they were kids. Even the movie poster is a great reference to a previous quote, saying how when they were kids they would wake up in the middle of the night and dark presence would stand at the foot of their bed.

You can tell the writers and filmmakers realized part 2 wasn't up to snuff. So in part 3 (or part 0 I guess? Maybe?) they take a different but familiar route. Set in the 80's, the video is captured by Katie and Kristi's stepfather who shoots wedding videos for a living. So, again, having video cameras around make sense here. And of course all it takes is one odd, accidental moment that causes him to obsess over the possibility of a supernatural presence and takes a note out of Micah's book twenty years earlier by setting up cameras all over the house at night. Very convenient but... whatever.
In this version the build in tension isn't quite the same and that's not necessarily a bad thing. Yes they work with the "kids can see and interact with the supernatural stronger than the adults" cliche but better than part 2 and other demon movies. In this Kristi is the focus instead of Katie who is otherwise the major focus of the franchise. Kristi has an imaginary friend who is obviously the supernatural presence of the story. Like Danny and Tony from The Shining, but this is a demon instead of a telekinesis power. And as far as everyone except Kristi knows this friend is just imaginary. An awkward, writer's block approach but I guess it works.

The most awkward being the turning point. The mom and stepdad of the movie are recording a sex tape. A couple minutes into the foreplay their house is hit by a rough earthquake. They rush out of the room to check on their daughters, the camera falls to the ground and it captures dust covering an unseen presence. And so the rest of the movie begins.

It does clumsily go through some of the obvious steps it had to go through... like "what the fuck is this?!" and "you're crazy and being obsessive" and of course "I checked out a demon book from the library and we're fucked!" But inbetween is some of the best moments outside the original movie because they made new paranormal moments that maintained an element of subtly we wouldn't see in later installments.
The demon's presence is stronger than before but it's all off camera. Most commonly used at night in the girl's bedroom. Kristi will wake up in the middle of the night, walk up to the camera looking just behind it and softly speak to her "imaginary friend" and it's definitely creepy. Then there's the Bloody Mary scene when Kristi and her babysitter (her stepdad's assistant) play the game in the bathroom mirror only for there to be an earthquake-like attack from the demon, throwing shit everywhere. But my favorite is easily when what appears to be Kristi walking around under a bed sheet like an old fashioned ghost, then suddenly vanishes, leaving the sheet behind as if she fell right through the floor, all done very well and seemingly organic on camera. It's actually quite beautiful an effect.
While far from super scary or haunting, it's because of moments like this that make this the most unsettling of all the sequels.

It's unfortunate that despite the good this installment brought to the table it also brought a lot of convoluted details, raised more questions that will go unanswered while answering questions that didn't need to be answered in the first place, a lot like the last movie.

I think it's best to jump right to the ending.
While the girl's stepdad is researching demons he finds out about this coven that communicated with the underworld and introduced the below symbol... 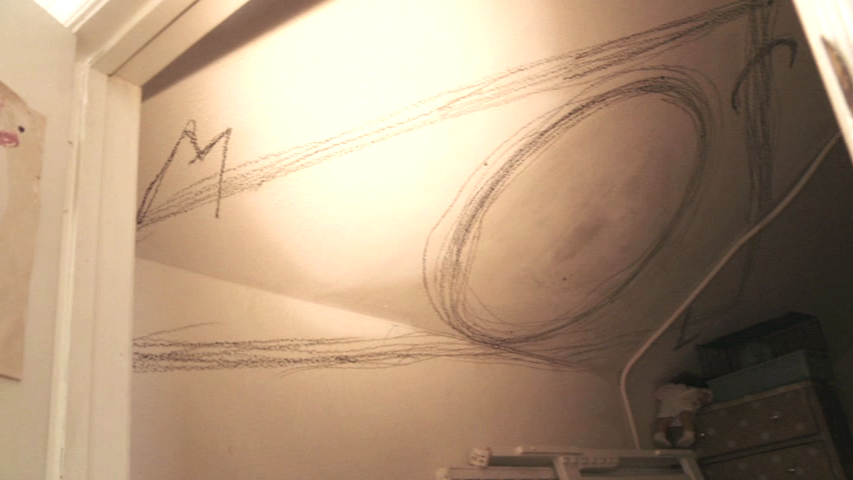 ...that I think they thought would be more iconic than it actually became despite appearing to have an actual, real world history behind it...

...and everything went a direction it didn't need to.

I cannot stress enough that these are questions that don't need to be answered. For some reason when it goes a direction like this, unless it was thoroughly thought out from the beginning, an attempt to make the story seeming bigger it actually makes it smaller and less interesting. It answers the questions of "why them?" and "where did this come from" simply with... witches.
It's like the writers felt the demon needed a reason or motive to be present instead of everything they told us up to this point.

To quote the first movie "Basically, they're these malevolent evil spirits that only exist to cause pain and commit evil for their own amusement. It's pretty creepy- I mean, they stalk people for years, like decades, and sometimes they're really intelligent in the way they do things to freak you out."
And that's not a good enough motive?!

No, instead what we find out is this demon is connected to this coven who called the demon. I don't know if the writers realize this but that deflates the demon quite a bit, making the coven seem like a stronger enemy than an EVIL SPIRIT that ONLY EXISTS to CAUSE PAIN! Made even worse when we find out it affects Kristi and Katie because their grandma is part of this coven. Which brings me to the ending.

When things seem to be at their worst, after one BITCHING effect when the demon picks up and drops literally EVERYTHING in the kitchen from the ceiling, the family leaves the house to stay with gramgram.
That night Mr Stepdad can't sleep because of some noise so he goes to check it out. He can't find gramgram anywhere. It's dark, there are cars outside, and everything seems odd. He goes into the dining room and the paintings are off the wall, revealing the triangle circle and a pentagram. He looks outside and there's a circle of mysterious people around a bonfire. Eventually he goes back upstairs to get his wife and kids to leave because shit ain't right. Looking up the stairs he sees his wife held up in the air by nothing but the demon's evil powers and she's thrown right at him. They fall down the stairs and she is looking dead. Badda bing badda boom gramgram catches up with him with her witchy powers over Kristi and Katie, kills Mr Stepdad, and they walk off. Roll credits.

Now this end scene, while I don't like the direction it took, did give off some creepy imagery and shows the filmmakers had some sense of keeping it scary in all the right ways. Yeah Mr Stepdad's murder was a tad over the top but this scene is one of the best scenes in the movie. Story-wise not so much.

This last scene bugs me more than anything else in the movie for reasons I've already stated but also for inconsistencies later on in the canon. When Kristi and Katie talk about their childhood experiences it's all very vague and seems personal. Like it was there, haunted them, but never did anything to the point this prequel explains. You'd think after this experience Kristi and Katie would be more prepared than they were depicted in the later stories. Since these were written out of order that wasn't going to happen, but this is a great oversight that was made for the sake of the franchise being more exciting with a new sequel.
Also there's no mention of the fire that burned their house down. A key element brought up in the first movie. Well... outside of a blurred, single frame that pops up at the very end of the movie. The one major detail talked about in the previous movies is glossed over like it was no big deal and was replaced with a story that had no connection little to no reason to exist in this franchise.

Still this is the best of the sequels so far. If you were to ask me I'd say watch the first, skip 2, then go right to this one. But at the same time I can't help but feel this one is good only because it was a lot better than part 2. So is it good by comparison? Because it's the best of a drivel of sequels that never needed to be made? Hard to say... I still think it's worth checking out for the good bits. I only wish the writing went a different direction than it did.
Posted by Thirsty->Cat at 5:34 PM