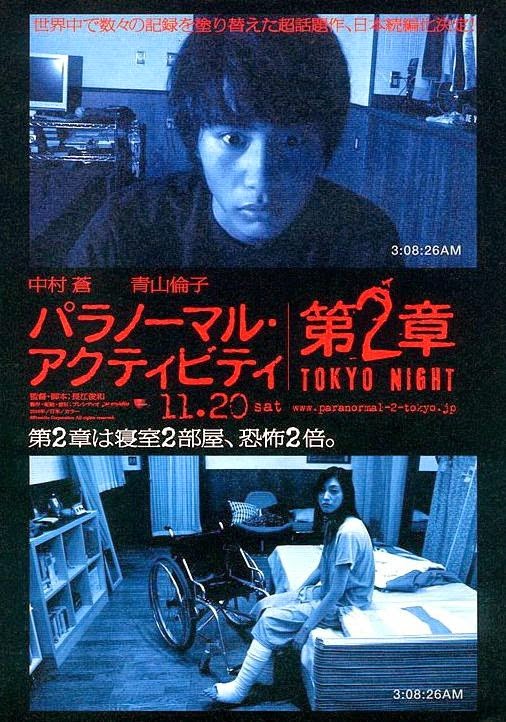 History: This sequel of sorts was released the year following the major success of the first Paranormal Activity. With so little information available it's hard to say how it came about or how it is connected to the original. But from what I can tell all signs point to this being an independent production with no real canon or connections to the original or it's sequels outside of using the original as a starting off point.
This is similar to when Lucio Fulci made Zombie in 1979 but it was marketed as if it were a sequel to Dawn of the Dead, even though George Romero had no involvement on the project.

Personal History: My first viewing of this unofficial sequel.

Version I Watched: The whole damn movie is on YouTube. That's where I watched it because any and all DVDs and Blu-Rays I can find online were either Italian, German, French, or the original Japanese home video release. They were either subtitled in their respective language or it wasn't clear enough if there would be English subtitles. Thankfully YouTube had me covered.

Review: Even though this review is coming up third I actually watched this entry last. The reason being I knew I would not enjoy the later entries in the franchise and I was hoping the Japanese copycat would be a better experience because of that wonderful style of terror Asian horror tends to have.
The results were... not what I hoped.

In the History section I compared this to the Italian pseudo-sequel to Dawn of the Dead, Zombi 2. For those who don't know the story, in Italy Dawn of the Dead was titled Zombi. It was so successful that Lucio Fulci's latest horror piece was named Zombi 2 despite not having any sort of connection to Dawn of the Dead with no one similar involved. But it still had a similar theme, idea, etc, but totally different.
That's really the easiest way to describe Tokyo Night. It was made by an unrelated group of people but straight up called it Paranormal Activity anyhow. And again, they took similar themes, ideas, styles, and so forth and tried to make their own movie out of it. The results are what you expect. It feels like an uncreative ripoff that's trying to cash in on a popular franchise.

Watching this did make me feel like I take some of the official canon entries for granted. While I have issues with the overall story, how it all works when placed next to one another, and so forth, one thing the canon entries have is consistency in style and execution after the first movie. They all feel like they live within the same universe and convey a certain tone each time around regardless of how effectively they pull it off from movie to movie.
Tokyo Night just felt so cheap and lazy by comparison. Makes me feel like I should stop talking now and not even compare it. But since they decided to include it as a Paranormal Activity movie I am going to use it.

When I say cheap I mean it felt so slapped together without much thought or care put into it.
The core problem is it tries way too hard to emulate Paranormal Activity with little to no original thought. It goes through many of the same motions, poorly, and straight up copies scenes and scares from the first movie so closely it may as well be plagiarism.
It would be one thing if it were a Japanese shot for shot remake of the first movie but it isn't. Especially since it doesn't convey any sort of weight or empathy. All the characters are poorly fleshed out and the acting is wooden. The male lead looks like he's making his first movie and is nervous about all his lines. The female lead is a little better but not by much, as she's given little to do besides scream a lot and react to her brother, the male lead.
What also didn't work was how the copycat scares are put in an odd order. Placing very intense moments early on that you normally wouldn't see until the second or third act of the story. It makes it feel unbalanced, especially towards the end when similar scares happen. It doesn't build up. It jumps to the top and stays there throughout.

I do have to admit there were a couple moments I enjoyed and/or the movie gave potential if implemented differently.
For one, at roughly the halfway mark the brother decides having a camera in both his room and his sister's room would be a good idea. Immediately we are shown both cameras on screen at the same time instead of cutting between the two (which happens a little but hear me out.)
I loved this idea because it has that potential of unique scares. So many times in this franchise's sequels they'll cut from camera to camera. But something that could be great are sequences where they're all running at once, giving a better sense of 'real time,' and something scary could be happening in multiple rooms at the same time, giving a stronger sense of fear and the inability to escape the threat.
This entry doesn't implement it in the way it could have been, but did show they had at least some creativity and some originality.

The other thing is actually one of the last things to happen in the movie. One thing I didn't mention until now was that the sister's legs (from foot to knee) are in casts as can be seen on the movie poster. That alone adds another terror element because of her inability to run, despite the fact you can't really run from a demon haunting your home. It simply enhances your fear because you can't resort to that natural reaction. That's not what I'm referencing, though.
In a scene very close to the end we see her slowly standing up onto her own two feet when she otherwise needed a wheelchair to get around. Once she's on her feet she shuffles out of her room and into her brother's room as if she were possessed. The way she walks was so creepy and unsettling. The shuffle and thumping of the casts against the hardwood floor... it felt like something out of Silent Hill. 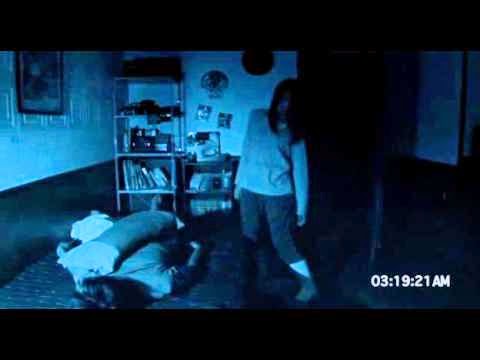 Seriously, you've got to see it in motion.

That's about all I enjoyed. Two or three things out of the whole experience. And what's weird is I wouldn't necessarily call this a bad movie. It's simply boring and unimaginative. This was an independent project that loosely connects itself to the franchise it based itself on with an ending that felt more like something out of Ju-on.
Paranormal Activity 2 may have felt like the Hollywood remake of Paranormal Activity 1, but Tokyo Night feels like a video project a small group of fans made in high school. A video project where they want to make their own version of said popular movie but wind up making a worse version of said movie with all the same material and little to no new ideas.

Since this isn't canon it's not necessary to watch. If you're curious you can watch it easily on Youtube. Not the best versions as the translations are poor, with indescribable subtitles at some parts, and one of the videos I found the audio was off with the video.
I don't blame the low quality of the Youtube uploads for my experience, I blame the filmmakers. It didn't infuriate me like other entries in this franchise, it just bored me.
May be worth a watch for the curious fan. Otherwise don't feel you need to go out of your way as it only has a couple of good ideas and good moments. The rest you can see in the first movie.
Posted by Thirsty->Cat at 4:08 PM