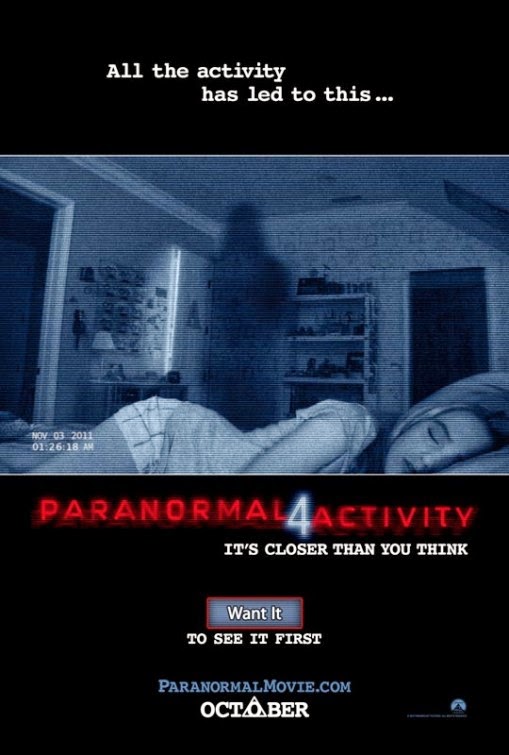 History: Despite being the fourth installment, this was the first sequel in a literal sense. Set several years after the events of the first two, this installment focuses on a teenage girl who lives across the street from the house Katie moves into years after her last appearance and is raising the one year old she abducted at the end of the second movie.
Just like the last two this was produced and released a year after the last and kept the small budget going. Saying this was a financial success is no surprise, earning roughly $140 million. But it is currently the poorest reviewed of them all. The main criticisms stating it "played it safe" and "is for diehard fans only."
Despite the negative reviews this was the most varied in the way the "found footage" was recorded. Utilizing not just home video cameras, but also smartphones, Macbook Pro, and XBox Kinect.

Personal History: Seen it only once when it was in theatres fall 2012.

Review: Remember all the positives I said for part 3? How it felt like there were still good ideas coming out of this franchise despite the flimsly and inconsistent story connections with the movies that came before it? Well put any hope of that coming up here because part 4 threw anything and everything that made the last three any good and threw it out the window to make this one something devoit of any suspense, tension, subtlety, or interest at all.
I desperately wanted to like this one. Desperately. At first I was surprised how good part 2 was (not so much anymore) and really enjoyed part 3, so I wanted to keep that trend going while avoiding the inevitable that the franchise would grow stale fast. Little did I realize just how quickly it would grow not only stale but mold and deteriorate right before my eyes.
When I first saw this I didn't know what to think because I wanted to like it so much, thinking it would get better with repeat viewings. The opposite happened.

I don't even know where to begin...

Well one thing this movie does is it attempts to move the story forward instead of going back with another prequel. Also it attempts to tell the story of a seemingly unrelated family experiencing this haunting with no connection to Katie until she and her abducted child show up. The plot kicks off when Katie (who we don't realize is her until the movie is almost done... but really who are we kidding here?) checks into the hospital and the family in focus is asked to watch over her kid for the time being. A creepy ass kid who, of course, causes a ton of weird shit to start happening.

No it's not that simple. This is not a copy and paste job to cash in on the franchise. This experience was even worse than that. The execution of this was so bad that you'd think it was made by people who only heard about the previous movies but never saw them. And the main problem is... teenagers.
Having a movie starring teenagers isn't necessarily a bad thing. But it is hard for people to care about them in a low effort, R rated horror movie where your core audience can't get in. Regardless we mostly follow a teenage girl (anywhere from 14-16) and her kinda sorta boyfriend walking, talking, and acting like teenagers in all the worst ways.
This may seem like an unfair complaint but it really overflows into the tone and execution.
The main problem is it feels like it was written and shot by teenagers, performed by their family and friends, and therefore meant for a very specific audience, an audience that wasn't Paranormal Activity fans. Really this felt like it was made to be a PG-13 summer horror flick for teens to get scared by cheap thrills on a Friday night while sneaking in Buffalo Wild Wings and making out with their BF/GF in the back of the theatre. Or... this is the farthest the franchise fell from it's intelligent and subtle origins.

It's hard to rack up all the things wrong with this installment. They missed the mark on almost every single aspect.

As you can imagine I didn't like the characters but for different reasons. In the past I've disliked characters because I felt they were making bad choices or were jerks and idiots. These characters are simply nothing. They're blank slates covered in cookie cut characteristics and are non-memorable. Our hero, the teenage girl, could have been anyone that age. Her pseudo-boyfriend is obnoxious. Her parents barely exists as with her little brother. The kid they're watching over, Katie's "kid" looks like a poor man's imitation of Damien from The Omen. There's just nothing memorable character-wise.
Even poor Katie, the girl whose been a part of all these movies in some way, shape, or form was given jack shit to do and didn't even need to be here. Her delivery and motivation is lackluster at best, making it easy to see that she did this for the money and nothing else.
Characters aside the biggest crime was the tone of the movie and the presence of the demon.
There is no sense of dread or terror. It would have been better if this was handled closer to part 2, which had little going for it as is. Any real attempt at scares either fall flat or are the safe bet of jump scares. Nothing imaginative, nothing well thought out, just... nothing. Which is a shame because the best part of this movie was the new use of new cameras, giving potential to new scares.
In case you skipped the History section, part 4 utilized not just a home video camera, but also smartphones, webcams, and even the then new XBox Kinect. This is creative, inventive, and makes sense considering who stars in the movie. More sense than them running around with a home video camera constantly. There are extensive scenes shot entirely on iPhone and a webcam which caused a downgrade in video quality in a good way. Makes it feel a tad more real knowing they used the actual devices kids that age would use. It's the only element of the movie that truly enhanced the experience.

That enhanced experience is quickly destroyed by the piss poor way they handled the demon this time around. Before the demon's presence was hardly made known, and when it was it built plenty of tension around it, and even then it was minimalistic. Here he shows up so much he may as well have been a floating sheet screaming "BOO!"
The worst offender in this is the use of the Kinect. At one point our hero's boytoy shows everyone via night vision on his video camera how Kinect uses thousands of little lights to pick up body movement. 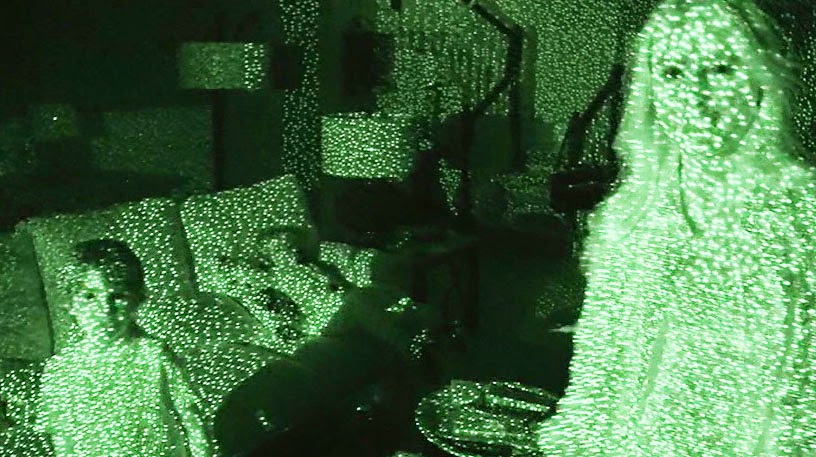 As you can see here.

Well... you guessed it... there are multiple scenes when there's a body of a person we can't see formed out of those dots. It's predictable, happens multiple times, and when it does it's not even scary. It looks stupid and is uninteresting. When they first showed the Kinect trick I thought it had potential. After seeing the results I realized I was wrong.
This, among other poorly paced and poorly placed scares, all leads up to an ending I'll admit I didn't see coming. I didn't see it coming because it came out of fucking nowhere and only made me ask questions like "what the hell?" and not in the way a good storyteller would want you to ask questions.

I could sit here and talk in more detail about what makes this one so bad but... ugh... that would be exhausting and rambling. Just take my word for it that this is the worst of the lot so far. As of writing this review I haven't watched The Marked Ones but it can't possibly be this bad. Could The Marked Ones do more to make the overall story more conviluted? Likely. But will it be this bad an execution? I doubt it. Little to nothing is redeeming here outside of the fact that it starts a pretty white blonde girl... a detail that hasn't won me over on a shitty movie since I was the same age as her...
Posted by Thirsty->Cat at 5:03 PM